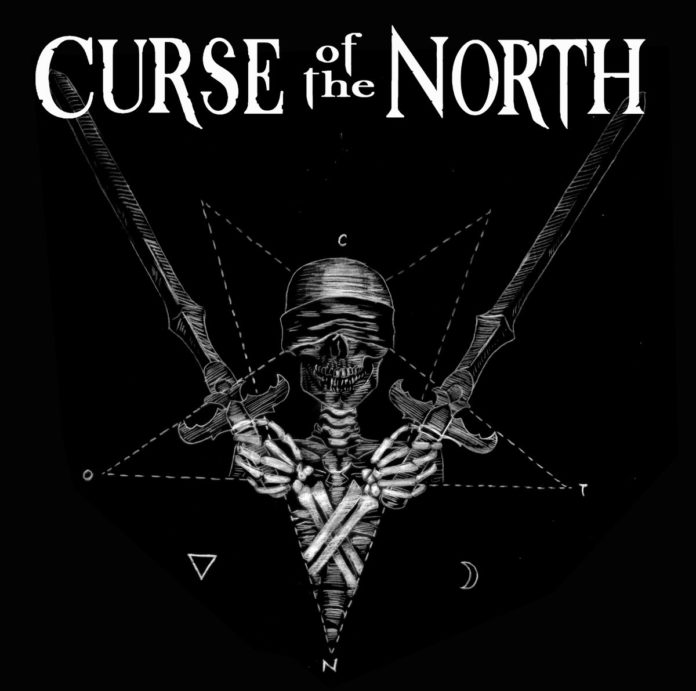 Sticking to tradition is a quality that is highly revered in heavy metal, as it keeps the music from being sectioned off into one of many subgenres. Curse of The North believe in following tradition while putting a modern twist in their music, but the twist goes a bit further and tighter than they may have expected, making for a performance that is a bit more warped than they had anticipated.

The most immediate and striking comparisons in sound are to the likes of Danzig and Red Fang, with percussion that is bold and forward coupled with intentionally lower production values to produce a groovy fuzz. In the speed and tempo there are traces of doom as things move along at a lumbering pace, methodically building up walls of sound that are then toppled over by blistering guitar riffs and rolling, crashing drums. One of the key elements in the construction of the sonic monoliths are the vocals which come out as a long, drawn out, and melodic drone that emphasize the gravity of the sound.

Curse of The North isn’t all about crushing weight though, as they do pick up a faster, anxiety-inducing pace. At times it feels much like Opeth’s My Arms Your Hearse with its sinister atmosphere, but then cuts in a with a more upbeat 70’s feel. In theory, this could lead to a very confusing performance, but they pull it together with excellent playing and a clear level of thought towards the development and construction of their sound, all of which makes for a very cohesive album.

Curse of The North might attempt to stay true to the classics, but their own unique style is prevalent; this is a good thing, since the band has enough talent and guts to stand on their own two feet. I look forward to seeing what they come up with in the future and, in the meantime, Curse of The North will be making its way into my rotation.

Another clueless online reviewer. Give it up and stop listening to Metal you noon.

Time to give it up generic clueless man.

Regurgitating views of other socially awkward autistic internet dwelling so called Metal fan. Get out of the genre.

Shave your generic beard hipster. Get out of Metal because you clearly don’t know shit about it.

The band’s you slate have more talent then your constant regurgitating of boring review phrases. Your like the critics Homer meets on the Simpson’s. Generic.

Jon B.
Reply to  Reviwermoron

These are some thrilling thoughts that you have, sir. Would you care to point out exactly where he was wrong about that boring schlock that Kaine calls heavy metal?

Not interesting and generic reviews from bearded hipster posing as a Metal head.

You know what’s sad? All the comments here came from the same IP address in the UK.
That’s right, Kaine decided to drop by and act mature like that. Isn’t that cute? ^_^
Thanks for the visit! 🙂