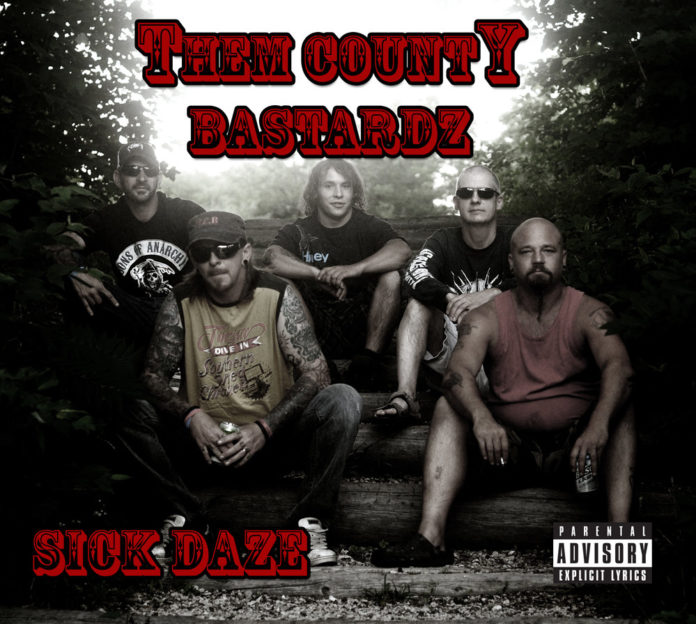 One of my biggest complaints for certain genres, such as modern day country, is the shallow gene pool that the lyrics spawn from. Maybe it’s just that I don’t “get” the music, but I can’t help but notice consistent themes of trucks, girls in trucks, and more trucks. Them County Bastardz demonstrate that country is not the only genre that is susceptible to inbred lyricism, and that it is in fact an issue created by the artist and not the genre.

While it could be considered shallow to critique a band on their lyrical content rather than the quality of their sound, in the case of Them County Bastardz it actually works in their favour. The instrumental at best provides a repetitive and basic experience that sounds like it was recorded in your neighbour’s garage; at worst, it sounds like a sludgy mess that was scraped off the recording room floor and converted into an MP3 format for all the world to hear. While through most of the album singer Andrew Watson does some strange yodeling-growl hybrid that quickly kills any interest that you may have had, at least the lyrics, an insane cocktail of tough guy pomp and backwater redneck, at least entertain.

Sick Daze is quite simply a boring disaster. There are some intros that have an interesting bass line or some percussion that demonstrates at least a bit of skill, but they are quickly drowned out in a cowbell that is mixed way too forward, and a sludgy, filthy guitar. In all honesty, one song, “The Bastard,” is actually not horrible. The guitars manage to break out from their terrible riffs and try to make some music happen, and the singer decides that maybe yodeling non-stop isn’t the way to go and throws in some average vocals and half decent screams into the mix. If this song had been released as a single I might have actually thought these guys had some potential.

When laughably bad lyrics are the highlight of your album, it may be a wise decision to reconsider the direction of your music, or possibly your career. Perhaps if you ever need a soundtrack for the long drive back from a successful hunting expedition with the stench of long dead animals wafting through the air, Them County Bastardz could be just the fix you’re looking for, pardner.