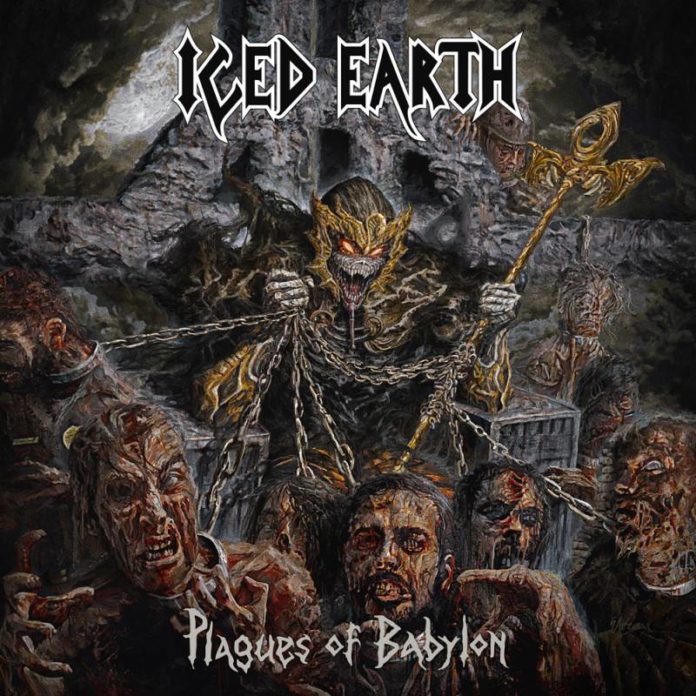 There comes a time in a band’s career when they have to part ways with a crucial member who helped develop their trademark sound, and rise up to the challenge of proving they are able to go on. For Iced Earth this change seems to be a constant, driving the band forward. Gene Adam, John Greely, Matt Barlow, “Ripper” Owens each had their impact on Iced Earth’s sound, but it was always the mastermind, Jon Shaffer, helming the vessel. After Matt Barlow’s second departure from the band, Schaffer saw the potential in talented Canadian singer Stu Block. However the first offering with Block as the lead singer, Dystopia, although exceptionally good gave of the impression that the band was still holding a lot of their new found potential back, possibly in order to make Dystopia a bridge between the old and new eras of Iced Earth. The band’s latest effort, Plagues of Babylon, sees that potential fully unleashed.

The band’s eleventh album features a heavier and more mature sound compared to its predecessor. While Dystopia was heavily influenced by power metal, Plagues of Babylon draws influences from traditional heavy and thrash metal, and the likes of Testament, Slayer and even Iced Earth’s early works. The music is dark and ominous; the devilish acoustic guitars setting the stage for pounding riffs and Stu Block’s sinister delivery in “The End” or “Cthulhu” (my personal favorite). The album is also slightly slower than the previous releases, mostly mid-tempo with a few faster tracks to liven things up like “Democide,” the bastard child of Slayer and Iron Maiden.

Although Plagues of Babylon shows an outstanding performance from the whole band, it is Stu Block’s performance that really shines through. Block seems to have strayed further from sounding like Barlow and found his own sound, managing to showcase his fantastic range and powerful delivery through an array of emotions. If Dystopia seemed to have held a lot of Stu Block’s potential back, Plagues of Babylon really released this enraged beast out of its cage. Stu Block is definitely the star of the album, not a small feat in a release featuring guest performances by Russel Allen (Symphony X), Michael Poulsen (Volbeat) and Hansi Kürsch (Blind Guardian).

I frequently tend to become overexcited with a release, only to be disappointed (like with the latest Rhapsody of Fire album) when it just doesn’t live up to my expectations. Not this time; Plagues of Babylon is just what I was hoping for and more.