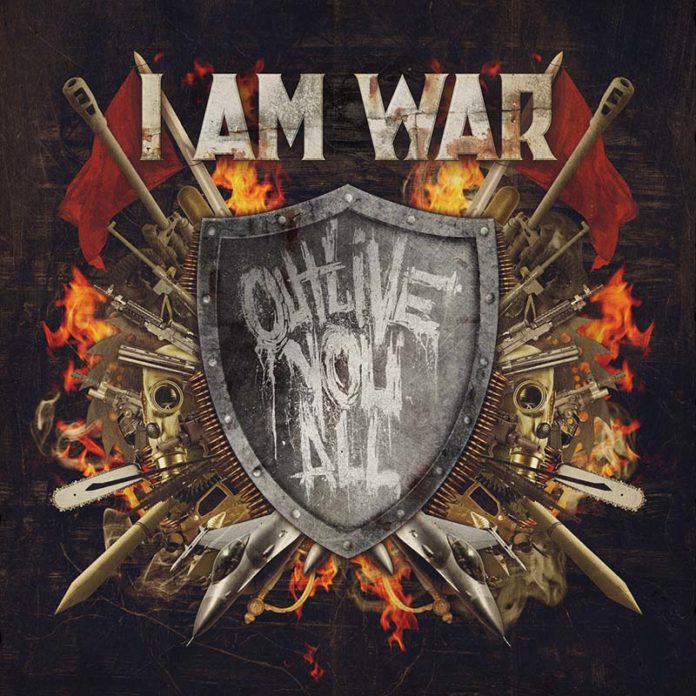 What happens when vocalists from two of the most prominent bands in modern metal get together? Apparently, the result is I Am War, a pseudo metal/hardcore outfit comprised of Bleeding Through‘s Brandan Schieppati and Atreyu‘s Alex Varkatzas. Outlive You All is the duo’s first collaboration together, and you know what? It’s not perfect by any stretch of the imagination, but it does get you excited about what the two might do in the future.

Alex Varkatzas handles nearly all the vocal duties on Outlive You All while Brandan Schieppati handles the guitars. Outlive You All is a straight up, in your face hardcore outing with a good dose of metal and a sprinkling of grind for good measure. The album is actually heavier than I think anyone would have anticipated; especially when you look at who was involved. It’s blatantly clear that Outlive You All was used as an emotional outlet for both members, and I think that’s a great thing. Alex has his most powerful performance on vocals perhaps since 2004’s The Curse, bellowing verse after verse with a force and emotion that hasn’t been seen in over six years from the Atreyu vocalist. I’ll admit it; after 2007’s Lead Sails Paper Anchor I was wondering if Alex forgot how to scream. Outlive You All should set the record straight; he’s still got it.

The songs themselves are short, energy filled blasts full of anger and spite; the longest song on the album clocks in at under three minutes. The entire album clocks in at under a half hour long, so it’s a rather quick journey that runs at a rather nice pace for the most part. Since most of the songs are rather short, they do tend to get “clumped” together – which is a bit of a problem. Since the album is meant to be short, upfront, and in your face, most of the songs are fairly simple so it can be hard to remember specific parts for example. Basically, a bit more differentiation would have been nice; as it stands now songs tend to bleed into each other a little too much. There’s also a bit of a muted halo effect going on in Outlive You All; the beginning and end of the album are probably the songs you’ll remember the most, while the middle just kinda falls into “meh” territory. Of course this all happens over the course of 26 minutes, so thankfully it’s not as bad as if this would have happened in some progressive death metal album that spanned an hour and ten minutes in length.

Since Alex was on vocals, Brandan pulled guitar duty and it’s a mostly admirable affair. A few hardcore inspired riffs appear on songs like “Uninvite Me To Your Facebook Party” and “Nightmare”, but guitars suffer the same problem that the album as a whole does: too few memorable moments, too many forgettable ones. Drums, however, are a whole different story. It’s rather remarkable how….bland these drums are. Listen, programming drums is probably a tough line to follow: either they sound too technical and come off as downright impossible (which is fine for some genres of metal, but probably not for this one) or they just sound bland and uninspired. The drums on Outlive You All come off as the latter; it’s almost like they threw drums in because they had to, not because they thought it would add another layer or dimension to their music. At least Brandon on guitar has his little moments, but the drums are 100 percent completely forgettable on this album. A shame, really.

Production wise Outlive You All is solid, but has a few flaws. Vocals sound great and guitars sound good, but the drums have a nasty habit of overpowering the other instruments in a rather annoying way. This wouldn’t be a problem if the drums were actually  interesting but…they’re not. The album also features gang-shouted vocals, which would have been a nice except they sound totally unenthusiastic and uninspired. How the hell does that happen when you have a former UFC heavyweight champion joining in on the gang-shouts?

I really hope Brandan and Alex get together for another album under the I Am War moniker – Outlive You All, while flawed, still manages to be enjoyable. Seeing the two embrace the heavier side of their music is definitely a plus.

Hatebreed – The Divinity Of Purpose