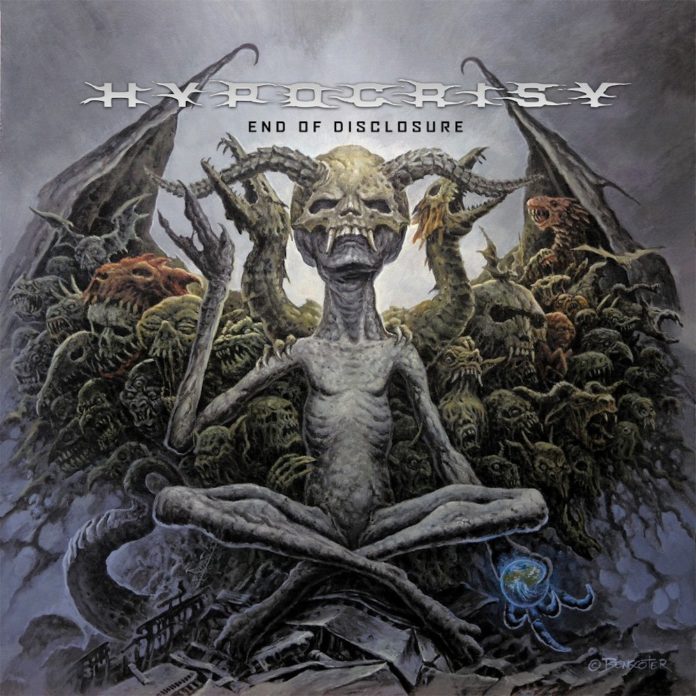 Yes melo-death fans, it’s time for another Hypocrisy album. Now, there’s two ways to read that sentence. “Oh man, another ho-hum swedish death metal album”, or “Fuck yes, another Hypocrisy release!”. I’m here to tell you, that it’s the latter. Simply put, End of Disclosure will own you. It actually pains me to say this, but End of Disclosure is the first Hypocrisy album I’ve ever heard. After listening to it, I’ll definitely be checking out their back-catalogue.

So, what makes End of Disclosure so good? It’s a combination of things, really. This is one of those “whole is greater than the sum of it’s parts” albums. Almost every element on the album blends so well together, that by the time it’s over you’ll be wishing the album was longer. That could only be a good thing, right? In fact, the amount of filler on this album is seriously close to zero . Of course this is all a matter of opinion (aren’t all reviews?), but I would really only pick out one track that just gives me a “meh” feeling. The result, simply put, is a kickass album. Unlike some other albums, songs that start off strong stay that way. There’s no dropping the ball midway through a song here; it’s just a straight shot from beginning to end. It’s great to see this sort of consistency within a release.

Guitars on End of Disclosure are just killer. First of all, the tone of them is great. I’m not usually one to nitpick things like this in a review unless it’s either really good, or really bad. The guitar tone on End of Disclosure  is great, just different enough from other albums of the same genre to be interesting, but not too different as to be distracting. You want an example of the latter? Just go listen to Soilwork‘s album Sworn to a Great Divide. Listening to that album with a good pair of headphones will seriously hurt your ears with that guitar tone. This is not the case on Hypocrisy‘s latest release. Of course, the backbone of any good death metal album is good riffs. The riffs on End of Disclosure  will melt your face off. Most of them sound so simple, but are so god-damn catchy. It seems like each song uses a different yet groovy riff, and if they repeated some I didn’t notice. I mean seriously, just listen to the opening riff on “Tales of Thy Spineless” or “Soldier of Fortune”. That’s some catchy shit. They don’t just show up for the openings of songs and then leave, either. The guitars are just hands down great all the time.

End of Disclosure does a good job of mixing up different songs throughout the album, so you never quite feel bored of it. For example, the track “Hell is Where I Stay” is not only expertly placed within the flow of the album; it’s also just a damn good track. It’s slower pacing and marching-style riffs are a perfect complement to the rest of the album that more often than not is galloping forward. Individual songs often offer both their own peaks and valleys; but unlike some other bands/albums, they never feel forced or cheesy at anytime. It all feels incredibly smooth and natural, no easy feat for a genre that’s had the same thing being done for 20+ years. Hypocrisy manages to pull it off with ease, though. Really, the only remotely disappointing thing about the album might be the drums, but in reality they’re not bad. They’re just completely overshadowed by the stellar guitar-work. The same could be said for the vocals, except that some of the higher-pitched screams are actually kind of impressive. I also found some of the production to be a bit muddy in some areas, at times things tended to blend too much together for my liking. The opening of “The Return” is a pretty good example of this. It’s a minor problem, though.

End of Disclosure is a great album. That’s all that needs to be said. Go listen to it now.