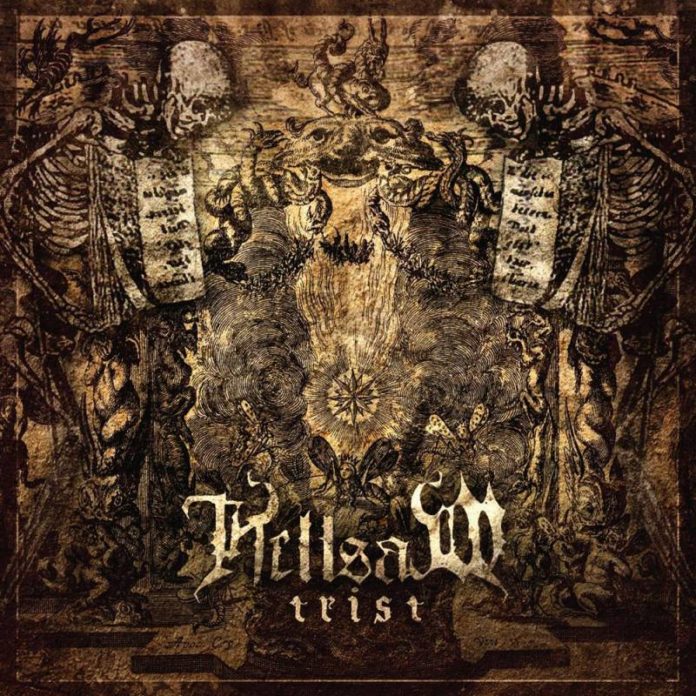 With a name like Hellsaw, one would be expecting some diabolical and unholy music to terrorize their roommates and neighborhood with.  That is what this Austrian black metal band has been doing for the better part of 11 years, and their upcoming album, “Trist,” is actually my first introduction to their misanthropic and depraved nature.  I may not be the most well-rounded black metal enthusiast, but I do enjoy a decent amount of it, and after my last run-in with black metal that had left a bad taste in my mouth, I most certainly hope that Hellsaw is the remedy to rinse clean with.

Before I listened to this album, I asked a friend of mine who eats and breaths black metal, and was already acquainted with the band.  His brief thought on Hellsaw is as follows:

Hellsaw are pretty similar to Naglfar in terms of playing a catchy and slightly more refined form of melodic black metal.

On first listen of “Trist,” he is most certainly right.  Not only was I getting a Naglfar vibe, but also bits of Belphegor during the more frantic and blastbeat-oriented portions of the music.  While I do make these types of comparisons between bands, Hellsaw does a fantastic job of letting the listener know that they are neither of those two bands; that they all somehow stumbled upon the right makings of good black metal and incorporated them all in different ways.

It was a smart move to open up “Trist” with ‘The Devil Is Calling My Name,’ because it has just almost every element you would expect to hear in a black metal album.  Starting off with a slower melodic build-up and vocals that sound as if Martin van Drunen (Asphyx, Hail Of Bullets) tried black metal, it lures you into its trap, which has been sprung once the break and furious riff comes at you.  You are knocked back by a thunderous and catchy black metal foray that has many weapons in its arsenal.  Hellsaw has no qualms about living up to its name with hateful spite in the form of ripping black metal, but they are very good at incorporating the melodic elements into their sound, as well.

As an example, ‘Doom Pervades Nightmares’ has a very slick melodic lead almost instantly, and with the spoken vocals to go with it creates a fantastic atmosphere and at the same time gets your feet tapping.  They even go a bit further in the same track, as it has a memorable drum and acoustic/flamenco-style interlude about 2/3rds of the way through to finish out the song.  Not only that, but the chorus of ‘The Forerunners Of The Apocalypse’ is incredibly catchy and has been stuck in my head for the past week.  There are even pieces of (what I perceive to be) melodic thrash metal showing up in ‘A Winter Cold,’ which was a nice-yet-unexpected change of pace.  The members of Hellsaw definitely have some chops, that’s for sure.

“Trist” is filled to the brim with very catchy and original material, making it known that they are not afraid to experiment with different musical elements in their brand of black metal.  Their willingness to go further than most black metal bands makes it a refreshing album in its own way when we are constantly inundated with copy-cat black metal bands coming out of the woodwork.  While their sound may not be as dissonant and cold as some would like it, you must treat “Trist” with different gloves since you are not going to get the straight-up black metal sound that some people would be looking for. Hellsaw has decided to try and reach across the aisle and bring new fans to their brand of melodic black metal, and I commend them, since that is not necessarily an easy thing to do.  My first trip with the band has been quite enjoyable, and I foresee “Trist” both picking up new fans and keeping the already a part of the allegiance to be satisfied with the album.  I’ll definitely be keeping my eye out for new material by Hellsaw.