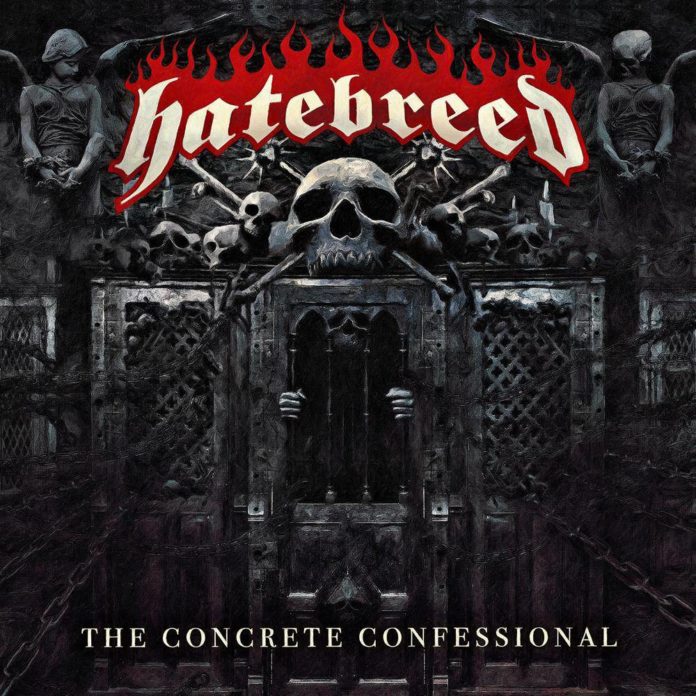 Hatebreed have been churning out socially and politically-driven moshpit anthems for over two decades now, becoming one of the torchbearers for metallic hardcore in the new millennium. They’ve seen a number of line-up changes, but have managed to maintain a pretty consistent sound; like buying a new AC/DC or Slayer album, you pretty much know what to expect with a new Hatebreed record. Rather than being monotonous or predictable, there’s something reassuring about having a band that sticks to their strengths, instead of trying and failing miserably to experiment with their sound (seriously, who actually enjoyed Lulu by Metallica).

The band’s latest offering, The Concrete Confessional, is the perfect soundtrack for a circle pit, with plenty of Slayer-meets-Sick Of It All riffs, frontman Jamey Jasta’s pissed off bark, and choruses full of gang vocals. The opening track, “A.D.,” hits you with a barrage of rapid-fire riffing and heavy bass, serving as a fitting first shot for the sonic warfare that follows. The band keeps up the aggression even if they don’t always keep up the speedy pace, like on the more mid-tempo tunes “Seven Enemies” and “Something’s Off.” “Us Against Us” has an old-school vibe to it that will certainly please fans of the older, more punk oriented material, but still manages to squeeze in a pretty savage breakdown at the end for those looking for something a little meatier. The maturity in sound and execution is pretty apparent in The Concrete Confessional, particularly when you compare it to Satisfaction Is the Death of Desire. Indeed, despite the lineup changes, Hatebreed plow through each track like a well-oiled machine.

The production gives the songs an added punch, emphasizing a thick bass-driven tone, and giving the guitars a satisfying, crunchy sound. Although it’s definitely cleaner-sounding than the band’s first few releases, the songs have by no means lost any power. Even the ficklest of fans would be hard pressed to find something to complain about with the production; the guitars are bright, but still have great low-end, the bass thick, the drums are huge, and the vocals add an extra layer of aggression. The transitions into the breakdowns (yes, there are still plenty of breakdowns) are pretty smooth, making the breakdowns feel like a natural part of each song.

If you’re not a fan of “core” bands, Hatebreed probably won’t change your mind with this record, since there are lots of breakdowns, and a lot of punk rock in their sound. For example, I found “Seven Enemies” to be a little too choppy for my liking, sounding mostly like an extended breakdown, though the chords ring out a bit longer on the chorus. Still, that’s my only complaint with this record, and it’s really a minor thing when considering the album as a whole. Too metal to be a punk band, but too punk to be a metal band, Hatebreed are perfectly content with carving out their own niche, and the world of heavy music is all the better for it.

IN A NUTSHELL
Hatebreed continue to mature and have released one of their heaviest records to date
POSITIVES
Heavy riffs with great transitions into breakdowns
Solid production
NEGATIVES
Riffs can get a little choppy at times
4.5