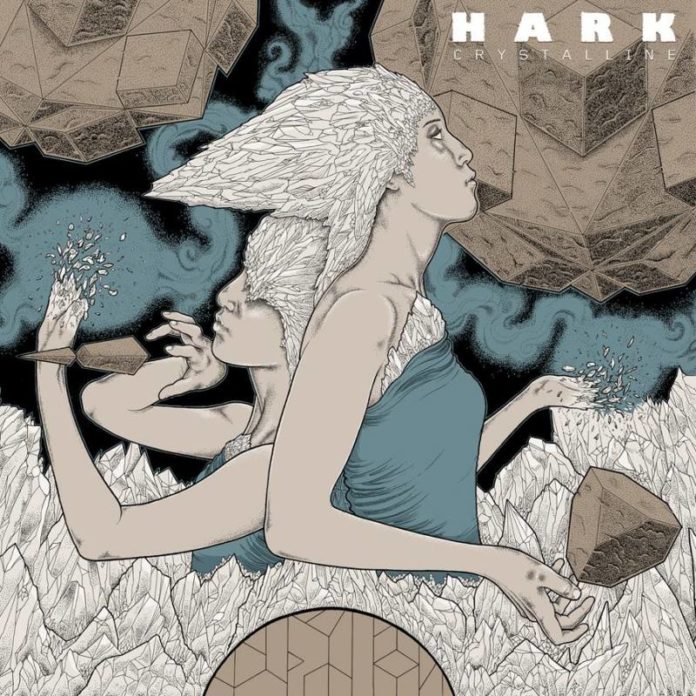 Sludge is a genre that has received considerable attention over the last decade or so, and has spawned some extremely compelling and popular acts such as Mastodon and High On Fire. There have been endless debates on who started the sound, and where it came from; some say it was the Melvins up in the Pacific Northwest, others say it really began down in the swamps of Louisiana with Eyehategod and Crowbar. Wales, however, is one of the last places you’d typically think of when it comes to sludge, but with the release of Crystalline by Hark on Seasons Of Mist, prepare yourself to think twice about saying sludge is an American game.

Hark have quite a lot of things going for them before yoou even have your first listen: vocalist/guitarist Jimbob Isaac fronted the celebrated stoner/sludge band Taint for over 16 years, Kurt Ballou of Converge mixed and mastered this album, and Hark are a sludge band on Seasons Of Mist, a label primarily known for black metal and death metal bands. All of this would be meaningless though if Crystalline didn’t absolutely rock, but rest assured that it isn’t just a good album, it’s a great album. One thing you’ll notice pretty quickly in the very first song, the cleverly named “Palendromeda,” is Hark has a penchant for odd time signatures, owing just as much to math rock as it does to stoner rock. The sound can be compared to such progressive-minded bands as Mastodon and Baroness, but there’s also hints of Botch and These Arms Are Snakes, which makes for a unique sound that really puts these guys in a league of their own. It’s easy to make comparisons to other bands, there’s elements of the aforementioned bands, as well as more rock oriented bands like Red Fang or 16, but Hark are certainly no clones or Johnny-Come-Latelies, these guys are the real deal and have put the rest of the modern sludge scene on notice.

Jimbob’s  guitar work is truly awe-inspiring at times, and there’s quite a collection of tones that range from fuzzed out overdrive to super psychedelic reverb, sounds that are just as varied as the mammoth sized riffs. The vocals are a bit more melodic than the standard sounds you get in this style, but they’re just as strong as the music they accompany; Jimbob has a sound that falls somewhere between John Baizley of Baroness and King Buzzo’s higher register, at times melodic enough to appeal to an audience that would normally give this sound a pass, at others, gruff yet melodic, and very complimentary to the music. The guitar and vocals would fall flat without the support of Nikolai Ribnikov on bass and Simon Bonwick on drums; they provide a crushing low end that really brings the heaviness out of the riffs, and are truly the backbone of the band. Kurt Ballou has left his undeniable mark on the music here with a pristine production, albeit somewhat cleaner than he’s known for. There’s a lot of low-end in the mix, but not so much that it muddies the sound up; in fact, you can hear every little note and pick up every little nuance in the vocals, and will sound just as good in your stereo or computer as it will in your headphones, which is just as much a credit to the band as it is to Kurt’s mixing board alchemy. The final track, “Clear Light Of…,” showcases everything great about Hark; heavy grooves, psychedelic solos, pounding drums, and an impressive track length that passes the 10 minute mark; basically, the song is an epic, and a true highlight of the album.

Seasons Of Mist have knocked it out of the park by signing these guys, and Hark have proven themselves to be a force to be reckoned with in the sludge/stoner rock world. If you like Mastodon, Baroness, or Red Fang, Hark should absolutely be in your collection, and will keep your attention for many listening sessions to come.