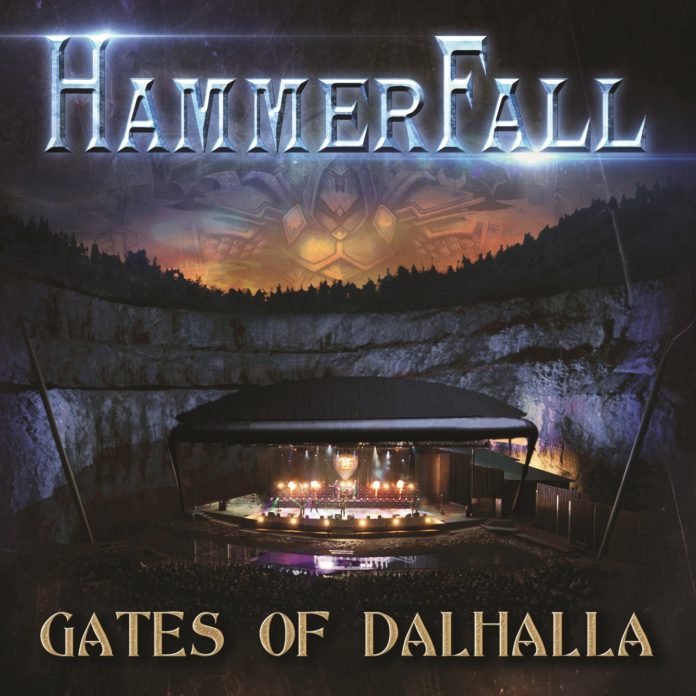 Seldom has a relatively young band such as Hammerfall had so much influence on the metal scene. The Swedish heavy metallers have had their ups and downs, but their 15 year old legacy is packed with great albums and songs many consider modern-day heavy metal anthems. Gates of Dalhalla is the band’s second live album, recorded during a very special show in their homeland.

Hammerfall toured a lot in support of their latest album, Infected, and the last two shows the band had played on this tour were the 2011 instalment of Wacken Open Air, Germany; and the special anniversary show in Dalhalla, Sweden. The latter was intended as a celebration of the band’s successful 15-year long career, and included many very special guest appearances, but more on that later. The setlist included songs from their latest album, such as “Patient Zero,” “Bang Your Head,” “One More Time,” and also some of the band’s greatest hits: “Riders on the Storm,” “Heeding the Call” and “Let the Hammer Fall.” Apart from those, the set also featured some rare tracks, the band has not played in a long time: “Threshold,” “Crimson Thunder” and “Fury of the Wild.” As mentioned before, the performance also featured some very special guests: Stefan Elmgren, former guitar player, on a couple of tracks; Jesper Strömblad (an original member of Hammerfall, and formerly of In Flames) on “The Dragon Lies Bleeding;” and Mikael Stanne (Dark Tranquillity), the original Hammerfall vocalist, on “Steel Meets Steel.” Their appearance added to the nostalgic feeling, and is a great asset to the release. Joacim Cans fronted choir, named “Team Cans,” also added some extra spice, performing “O Fortuna,” as well as “One More Time” and “Glory to the Brave” with the band. The finale featured all the guest jamming together to the band’s greatest hit, “Hearts on Fire.”

The band’s musical skills aren’t in doubt, as the band is renowned for their supreme skills. However, having seen the band live, I feel that the real energy of their performance is not so evident on this record. Although everything sounds great, the sound is so polished at times that I get the feeling that this isn’t a live record at all. The relative lack of audience in the final mix further adds to the impression that the record was, indeed, too refined.

Overall, Gates of Dalhalla is a great way to celebrate the band’s special anniversary. The songs were carefully picked, and present the band’s history in the best manner possible, featuring the classic tracks from the first two records, the 2000’s and their most recent efforts. This record is a great gift for the long-standing fans, and a great way for those not yet familiar with Hammerfall to get acquainted with the band’s work.