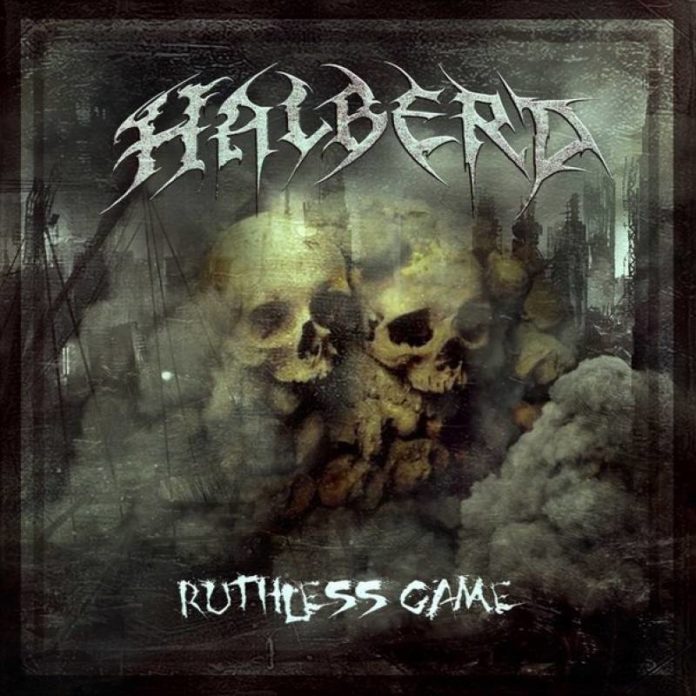 While Russia may be no stranger to the realm of heavy metal, I have to say it’s not the first country I think of when I hear thrash metal being discussed, being mostly known for their (excellent) black and pagan metal bands. That’s too bad, really, because there have been a few decent bands from there, Master being a great example. As early as 1987, they were playing at blurring speeds, and even went on to tour with the likes of Sepultura. Halberd, a brand new band from St. Petersburg, make for a pretty convincing case that Russia shouldn’t be counted out of the race when it comes to all things fast and heavy.

I can’t tell you how relieved I am that there are still bands that want to go back to the roots and not put out more of the “pizza, beer, and zombies” cross-over variety of thrash. It has its place, sure, but it has been done to death. Even when it comes to this classic style, Halberd departs from the norm, seeming more content in playing a more melodic form of thrash that has more in common with German thrash gods Kreator and Destruction than the usual Exodus and Testament that many of the “classic” thrash bands play these days. Even better, the music isn’t really a rip-off of the aforementioned bands, but rather a homage to them. The guitar work, provided by Denis Ivanov and Vladimir Govoruhin, is fast and intense without forsaking melody. Roman Bobrov has a very clear voice which is simultaneously melodic and raspy, very much along the lines of Mille Petrozza from Kreator. The rhythm section keep the pace going fast and furious throughout, and mixed perfectly. Really, the production is damned impressive. especially when you consider that this is an independent band;  You can hear every instrument without trouble, while still managing not to sound overly polished. There’s just enough grit in the tone to really give this album teeth, and enough hefty low-end to pound the listener into submission.

Stil, there’s one glaring misstep that keeps this from being a perfect record, and that would be the intro track. While it has melody and speed, it just doesn’t have the kick to the stomach that the rest of the album has. It almost sounds like a different band altogether. There aren’t any vocals, it ends a little too abruptly, and just doesn’t set the right tone to give you a taste of what to expect from the rest of the album. There’s a bit of melodic death metal feel to it, a la In Flames, which although isn’t entirely different from the German thrash vibe going on the rest of the time, it still causes a kind of hiccups when it is followed by an absolutely ferocious riff on the next track. Also, I wish the album was a bit longer, something that’s a testament to the quality of the overall material.

There’s a lot to like in Ruthless Game, and you should definitely pick up a copy if you’re a fan of Kreator, Destruction, or earlier Annihilator.