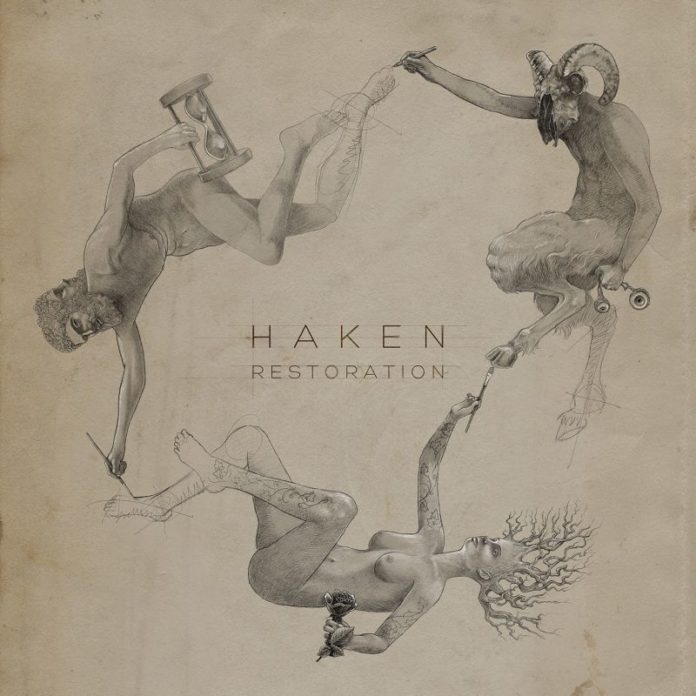 In 2008, Haken came out of the woodwork with their demo, Enter the Fifth Dimension, showing off their take on progressive metal with a unique jazz fusion mix. Six years and three albums later, Haken bring out Restoration, an aptly named EP that acts as a reimagining of that original demo.

Restoration begins with a track that pays homage to their second album, (you will start to see a pattern here) laden with their trademark progressive keyboards and guitars, going from being heavy enough to sink the sound into the depths of distortion, to being so light as to barely skip over the surface. From percussion, Raymond Hearne does his impression of Martin Lopez on Opeth’s Ghost reveries, with tight and concise work that presides over the more complex passages, while the sweeping vocals of Ross Jennings take control in the moments of buildup, crafting a feeling of menace and grandeur.

Haken then travel back in time to their very first album, Aquarius, with a piece so somber it is almost jarring to transition to. The once fast pace and rhythm slows down and stretches out, the distort on the guitar is thrown out, the keys stop their blistering rush and take on a mellotronic quality, and the drummer seems to have practically gone on vacation with a nearly catatonic approach. The vocals also take a sudden dive to a level so low they are just an octave above a drone, something that, combined with the constant extension of syllables, almost makes for a doom-like experience, minus the heaviness. While this may have worked on Aquarius because of the initial set up and development, here it misses the mark and winds up dragging on rather than giving the closure it had previously provided.

The band makes one last 180 degree turn, rocketing forwards into a delightfully light hearted sound that provides a stark contrast from what was heard mere moments ago. The jazz influences come into play as brass is added to the music and the vocals suddenly speed up to keep up with the raindrop work from the keys, reflective of Haken’s last album, The Mountain. The light nature does not last, being instead suddenly slain by a heavy progressive passage where the guitar and bass come smashing in and the drums produce some solid technical work, reminiscent of Dream Theater’s, Systematic Chaos. A back and forth between the lighter sound and the heavy, technical work plays out right until the end, making for a constantly changing, almost warped listening experience.

Restoration may be off target in some places, but it stays true to Haken’s previous work, making for what seems to be an introspective experience for the band. In addition to recreating their style, there are also some advancements present, suggesting which direction their sound may take next For fans of the band, and for those interested in sampling the work of a relatively new and solid prog act, Restoration is worth a listen,