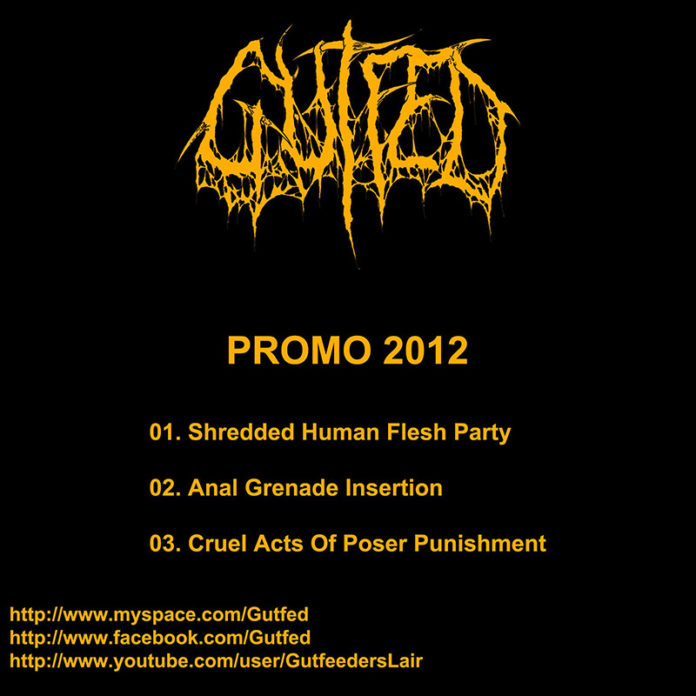 Guttural slamming brutal death metal.  This is what Gutfed does proudly.  Hailing from Istanbul, Gutfed is a three-piece act that seems to specialize in generally mid-paced slamming brutal death metal with sparring guttural vocalists.  They have provided me with this three-track demo, and for those of you who enjoy a good slam band, look no further than Gutfed.  There really isn’t a whole lot to distinguish them from most other slam bands, except for maybe the vocals, which are natural gutturals that lean more on the side of goregrind than anything else, and you know what?  I am perfectly okay with that.

Sometimes I am a man that loves to revel in the simplicity of things, and that is what Gutfed is able to satisfy in me; an appreciation for the simple things.  In a world of death metal where everybody is trying to be more technically thrilling and heavier (as well as sterilized and triggered), it’s very nice to see stuff like this existing, and the artists standing by their creation to the ends of the Earth.  With the groovy riffing, intricate cymbal work, and dual vocal attack in ‘Shredded Human Flesh Party’ your need for guttural mid-paced slam is met with great ferocity.  In the last third of the track ‘Anal Grenade Insertion’ the band decides to give a bit of speed, which was a nice change.  There’s also a small break in the music that just gives way to a very slow and rockin’ bass line that is very reminiscent of ‘Human’ by the German goregrind band, Gored.  The last track, ‘Cruel Acts Of Poser Punishment’ is more akin to the first track, but with some more dual gutturals working together on the same vocal cadences.  Gutfed are a new band, but they sure as hell satisfy that craving for a simple slam sound.  They are definitely for fans of Russian-styled slam like Katalepsy and older Abominable Putridity.