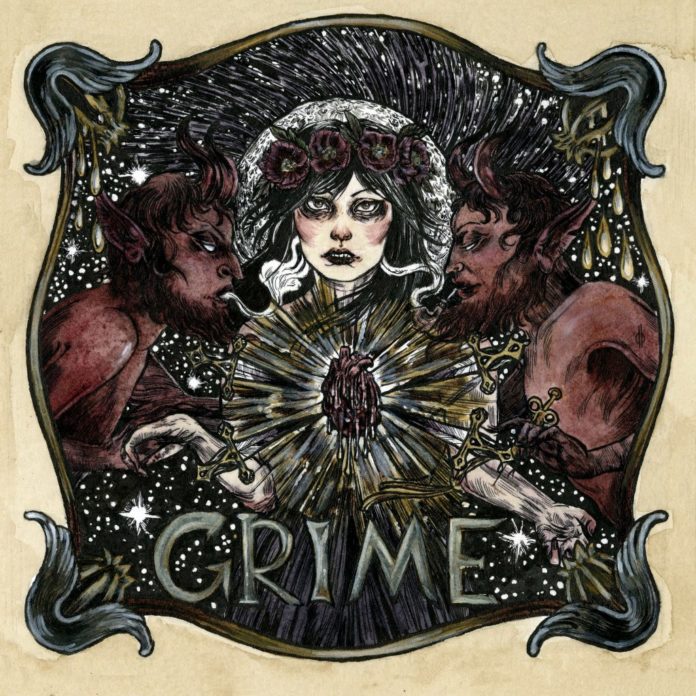 The best albums to come out of sludge metal have always sounded dangerous. It’s always far too easy to mask a lack of ideas with repetitive song structures and droning passages of guitar feedback, but the groups that have managed to remain interesting almost always sound like they’re going to rip your face off. Consider the misanthropic hatred spewed by Iron Monkey, the mammoth-trapped-in-a-tar-pit lurch of Noothgrush, or the vodka-soaked gutter hymns of patron saints Eyehategod. You shouldn’t just feel depressed and dejected when you’re blasting a good sludge LP, you should feel frightened. Some new bands have done a more than admirable job of carrying the torch, like Thou when they’re not being too optimistic, or end-times prophets The Body. But it is now with great pleasure that I proclaim Italian sludgemongers Grime to be one of the proverbial “bands to watch out for.” And you’d better watch out for them, because if they hit you when you’re not looking then you’re as good as dead.

Such a good album coming from an entirely new band isn’t unheard of, but once I learned that Grime shared members with Southern Lord hardcore heshers The Secret, it all started to come together. As displayed in their work with The Secret, these guys definitely know their way around a good riff. Their previous experience shines through brilliantly, as it’s hard to find a single boring moment on the band’s debut. The first thing you’ll notice about Grime is that it’s fuckin’ grimy. The production on this release is some of the filthiest I’ve ever heard, with guitar riffs that sound like they could have been played on the rustiest strings ever, drumwork with the perfect mix of reverb and filthy punch, and an absolutely acidic vocal delivery that recalls Mike Williams’ classic work with Eyehategod. His voice sounds so ravaged and caustic that I can smell the 180-proof fumes on his breath all the way out here. From the opening monster “Self-Contempt” to the closing beast “Wife-Beater,” you’re in for some truly bad vibes. Another one of the things immediately apparent about Grime’s debut EP is its brevity – well, relative to most of sludge, anyway. There’s only six songs on here, most being under five minutes and the longest being just over eight. The longer tracks do tend to drag a bit, which is only natural for sludge metal, but the band’s able to recognize when an idea has run its course and when it’s time to move on – the eight-minute “Chasm” has plenty of twists and turns that’ll keep even the most whiskey-soaked degenerate sludgie headbanging to the very end. It’s the shorter bursts that really draw you in, though, with the borderline boogie of “Born Sick” and the ominous lurch of “Charon,” which doom upstarts Cough rightly chose to include on their personalized playlist for CVLT Nation. And if anyone knows what makes for crushingly depressive metal, it’s the boys from Cough.

The only negative I can really say about Grime’s debut is that it’s way too short. Every time “Wife-Beater” ends, I find myself feeling a lot like a fat kid at the bottom of a too-small box of donuts. This “fun-size” debut is the perfect way for the band to whet our appetite for their upcoming full-length, and if you’re a fan of the sludgiest depths of heavy metal like myself, you’ll undoubtedly feel the same way. GET GRIMY.

[…] from The Secret proved that they can do mid-pace sludge incredibly well with their side project Grime. The problem with these two cuts isn’t so much that they’re doing the same riff for […]