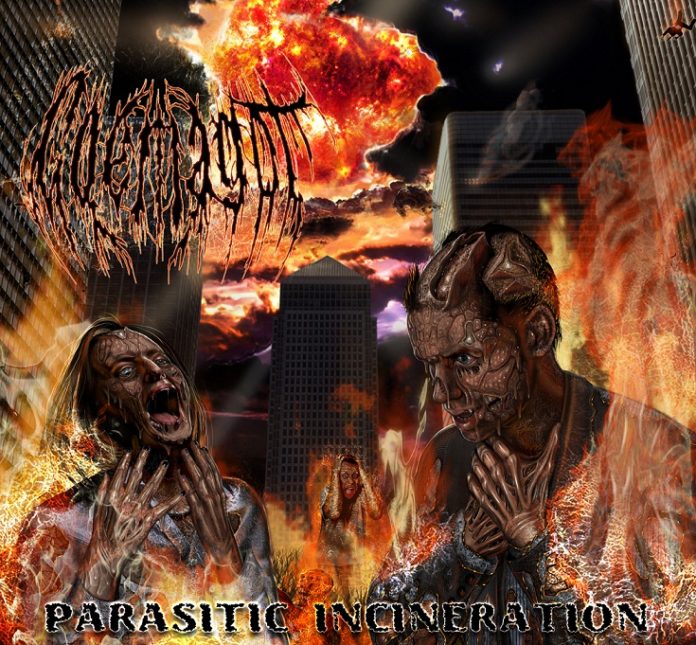 Anyone who has ever played in a band can tell you that demos, while typically overlooked by the general population, can be the biggest tool towards success in this cutthroat world known as the music industry.  In this age of technology where the internet provides everything at our fingertips, it has become much easier for smaller bands to be able to distribute their demo material all across the world, and Goemagot decided to take advantage of that simple truth.  A brutal death metal three-piece from Rochester, New York,  Goemagot looks to put their devastatingly heavy stamp in our collective asses with their first official demo, “Parasitic Incineration“.

Very rarely do I find myself so enthralled with demo material, but Goemagot is just able to scratch that brutal death metal itch so well.  The musical landscape of “Parasitic Incineration” resembles an international blend of death metal ranging from Disgorge to Putridity, and Defeated Sanity to Abominable Putridity, you will not be left feeling underwhelmed.  This means that you will get a wonderful mixture of classically styled brutal death with the newer elements of slam sprinkled throughout.

The barbarity that the three men provide is more than enough to put them over the mark, leaving you with a healthy breath of fresh air in a sub-genre where most bands tend to produce the same end results repeatedly.  While ‘Anthropophagy In The Womb’ has been dubbed as the chosen single that the band has been pushing before the release of the demo, I would have to say that ‘Garbage Plates’ and ‘From Man To Meat’ are where you will truly see Goemagot shine.  Each man makes sure to make their mark in the music; Cody McConnell’s bass and vocals give a cataclysmic low-end to Matt Murphy’s emphatically infectious riffs, which greatly compliments Daniel Hemmerich’s tectonic drumming.

The destructive power of “Parasitic Incineration” can also be found in its production.  I keep mentioning that Goemagot is a three-piece, which blows my mind in the same way that Origin‘s “Entity” did because it was recorded by only three people when it easily sounds like four or five all together.  No one member ever over-powers each other, meaning each strike of their instruments are completely simpatico, giving all three songs a brutal and relentless feeling that is greatly enhanced by the thick production values.

Even though Goemagot are less than a year old, they have crafted one of the best written demos I have ever heard in the realm of brutal death metal.  There is just so much to take in from these three songs that the replay value completely skyrockets from the very first play through.  Goemagot are actually going on a mini-tour later this month across the east coast and midwestern United States, so if you enjoy brutal death metal then I would highly suggest you go to one of their shows and give your support to a band that knows exactly what heavy metal in general needs in this day and age.