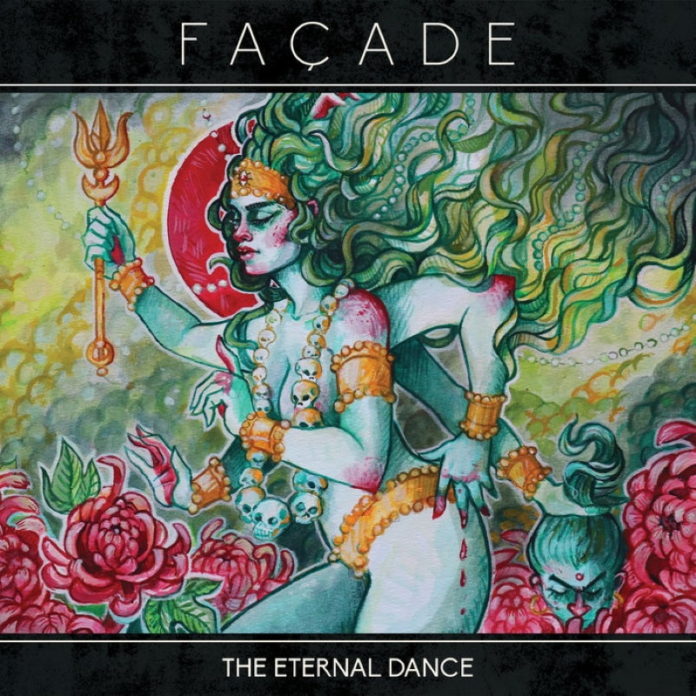 With five tracks, each bearing a single word as its title, this album from the Dutch doomsters of Façade is a hefty one. And though it’s only their second LP (and the second to be self-released), it shows impressive skill and confidence from the sextet, with activities running underneath the typical bassy broadness of the genre, providing a shot of creative vivacity. This is even noticeable in the fantastic cover art, which ties into the album’s concepts of traveling through cycles, with Kali and the Hindu precepts of reincarnation being an obvious fit for those ideas.

Leading with “Unmade”, the group builds up resonance and incidental harmonics as they drift towards the foundational heaviness. A livelier-than-usual drum presence, along with a noodly little weave riff on guitar, keep the song from succumbing to leadenesss right off the bat, and while things are never exactly light, the incorporation of higher-register tones does a lot to evoke a relatively welcoming air. That tone is tuned to a lower setting in the opening of follow-up track “Mask”, running a pair of guitars against each other with some neat dissonance before the rest of the instruments arrive, and finds ways to draw out more of those inflections as the song continues. As the shortest song on the album (at seven and a half minutes), it still finds room for effective divergence from the formula, with a tender bridge leading to a portion harsher than any of the preceding material.

That harshness only intensifies in “Ego”, the central piece of the cycle, though the gentle bridge technique is again employed to a nice effect. The bridge lasts much longer this time though, rising to an elaborate counter-pointing by the bass before the drums provide a burst and push things into a higher intensity from everyone. Fitting with the structure of the concept, though, the song is pushed back to a more subdued and heavier vibe (with some wonderfully morose guitar soloing) before it reaches its end.

“Death” and “Moksha” close the album, with the first running an almost alt-rocky riff over the heavier elements. Harder and more abrupt chord crunches than elsewhere in the album help this song fulfill the flavor of its name, while the warmth of the main riff provides a bit of fatal enticement against the roars and howls of the vocals. “Moksha” (Sanskrit for “liberation and freedom”) opens with a lengthy spoken-word sample on the nature of perception and darkness, accompanied by light percussion and resonant strings. The meditative atmosphere provides a strong and stimulating contrast to the preceding instrumental heaviness (which does get dabbed in at points of this track), and elevates the album as a whole to a more challenging and powerful state. Pretty damn fitting, and quite impressive in how it’s carried out.

Façade – The Eternal Dance
THE BOTTOM LINE
A thoughtful and intriguing work, with a well-executed mix of brutalism and hope
Reader Rating0 Votes
POSITIVES
Strong instrumental interactions
Clever compositions
Impressive overall structuring
More substance to the content than the genre usually gets
NEGATIVES
The vocals show little range in comparison to the rest of the musical components
4.5