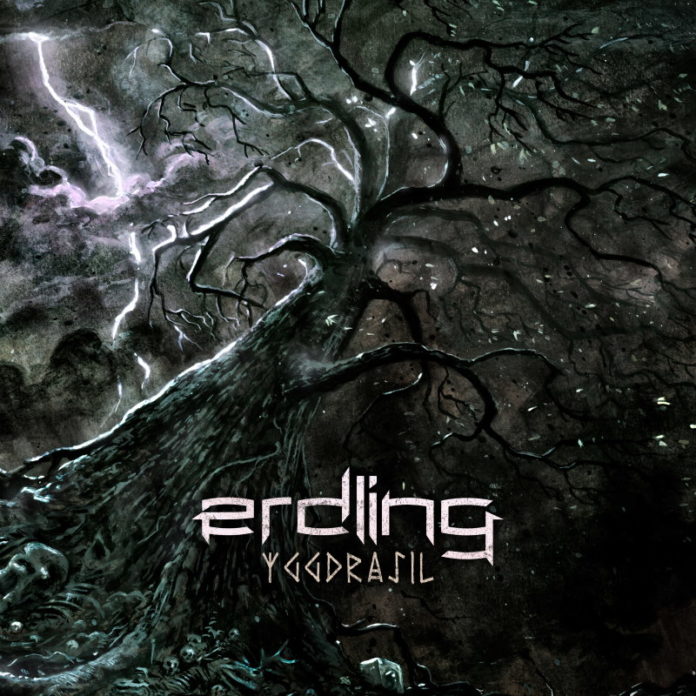 As Erdling’s fourth album, Yggdrasil demonstrates a firm grasp of their intended sound and style, with a flawless consistency in their presentation. Things are kept moving along (aside from the intro, only two of the eleven tracks on the album fall outside of the 3-to-4-minute range), the beats are decent, the emoting of the vocals comes through firmly, and the mixing of the instruments keeps things clear and punchy. For those who care to dig deep enough, there’s an ecological theme to the album (the die-hard edition comes with ash tree seeds, even), which makes for an odd mesh with the upbeat industrial metal instrumentation. Unless you speak German, though, it’s easy to overlook that aspect, which leaves the album to operate solely on its musical strengths.

Here things aren’t too favorable. There’s a mechanical air to the performances that hangs on even after setting aside the industrial nature of the music; part of that is the pop-standard duration of the songs, but the almost complete absence of room for experimentation and elaboration within the songs’ composition ends up being more damning. Running just forty minutes long, the album gives an impression of the band wanting to rush through and get it over with. “Sturmfänger” (the longest song, at a whole 5:25) is practically the only track to take a breath and try to find something more in its melodies and rhythms than just what the first run-through offers. It’s also where the Rammstein comparison becomes strongest, with a bit of the operatic schmaltz waltz of “Sonne” coming into play. That’s a little over halfway through the album and, unfortunately, there’s nothing in the remainder which rises to that level.

In the end, aside from curiosity, there’s just not much reason to listen to Yggdrasil. It’s not written, played, or mixed poorly, but there’s just nothing to be had here that hasn’t been done in a more interesting way somewhere else. If you want industrial metal, there’s tons with more aggression and inventiveness; for eco-themed metal, start poking into the sprawling options of pagan metal and green black metal; for NDH, pick any of the bands that helped pioneer it, instead of those which are working from the pioneers’ templates. Admittedly, if you want those qualities blended, I don’t know where else you’d go (Project Pitchfork‘s “Green World”?), so Erdling at least come away with an edge in that specific combo desire. Aside from that, you’re not missing out on anything by passing this over.

Erdling – Yggdrasil
THE BOTTOM LINE
About what you'd expect from a modern NDH album, but without much flair to distinguish it in years to come
Reader Rating0 Votes
POSITIVES
Good mixing
Decent riffs
Respectable energy
NEGATIVES
Too frequently exposes the formulas from which the band is working
Brings nothing new to the table
3