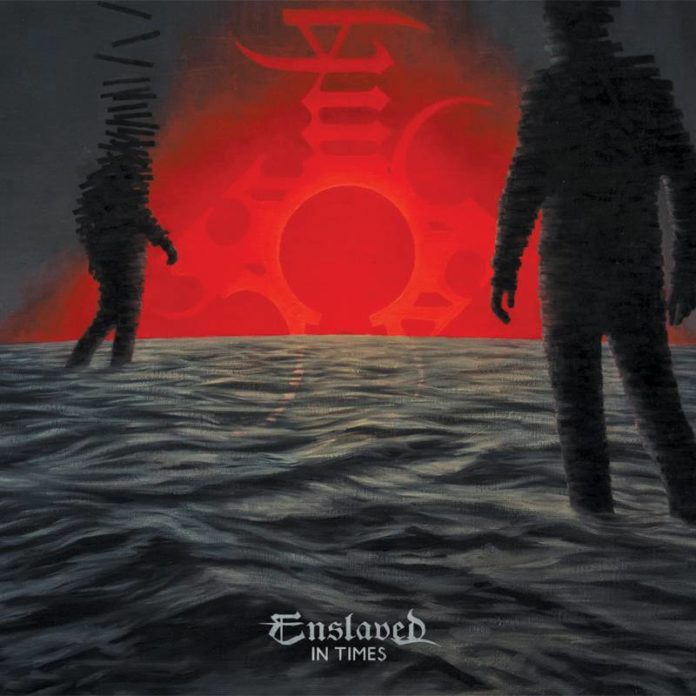 Over the years, Norway’s Enslaved have been a rather divisive band in the extreme metal world. Beginning with Below The Lights, bassist/vocalist Grutle Kjellson and guitarist Ivar Bjørnson have taken the band in a more progressive musical direction; the production is not as raw, the song structures are not as simplistic, and clean vocals have been added, all of which has pissed off a number of fans who seem to be looking for Frost Part II. 2015’s In Times shows that the band has no intention to slow down on their continual evolution into something truly new and exciting in the extreme metal world. While there are still blast-beats, plenty of tremolo-picked guitar lines, majestic keyboards, and Grutle’s shrieked vocals are just as violent-sounding as ever, this is definitely not the same band that brought you “Allf?ðr Oðinn” back in 1993.

One thing that is immediately apparent on In Times is a sense of maturity in songwriting. The transitions from brutal black metal to progressive rock heard on opening track “Thurisaz Dreaming,” for example, are smoother than past efforts, allowing the black metal assault to ease seamlessly into a more melodic tune, thanks in part to some beautiful soaring guitar work and melodic vocals provided by keyboardist Herbrand Larsen. The clean vocals have taken a much larger role on In Times, though the growls and shrieks are still heard all over each and every track. While I’ve felt for some time that Grutle’s aggressive vocals don’t mix very well with the melodic material that Enslaved have geared themselves toward, without a strong clean vocalist there really wasn’t much of a choice. Helbrand has truly come into his own as not only an excellent keyboardist, but a great singer as well; take “Nauthir Bleeding”, for example, where he provides the perfect foil to Grutle’s venomous howls, mixing black metal with progressive rock to absolute perfection. The precision with which the band switches time signatures and atmosphere is breathtaking; you will find yourself banging your head one minute, and then having your jaw-dropped by some beautiful clean singing and symphonic keyboards”

Still, not all of the transitions are smooth; in the last couple of minutes of “Daylight,” for example, the song goes from tranquil to thrashfest-y, with very little segue. It’s a bit jarring and felt a bit tacked on, which is disappointing since the majority of the album is actually much more methodical in its approach.

The production has been handled mostly by the band, to which I attribute the album’s super “focused” sound. The keyboards, guitars, drums, and vocals are all given equal footing in the sonic landscape of In Times, compared to previous albums where I’ve felt that the focus was mostly on the guitars. This is an album that should really be listened to multiple times to appreciate the band’s full efforts, as there are sounds to be heard in every nook and cranny of each song, while still avoiding sounding too busy. The layering of vocals, as well as the use of vocal effects, gives In Times a spacey sound, even when the riffs are pummeling your eardrums. The keyboards have become more of an extra layer to the sound, almost like another guitar line; this is very different from those heard on Vikingligr veldi, where they were mostly used to create a symphonic vibe, and actually felt like a post-production addition.

In Times is easily one of Enslaved’s most consistent releases, with smooth transitions between styles, clever time changes, and shining production values. If you’re one of the ones holding out for another straight-forward black metal release from Enslaved, I’m afraid your wait will be a bit longer, as the band shows no signs of regression.

One of Enslaved's strongest releases to date
Reader Rating0 Votes
Top-notch production, excellent transitions between styles, strong vocals
Jarring change between quiet and heavy moment on final track.
Fans of older material might not like the increasingly progressive sound
4.5