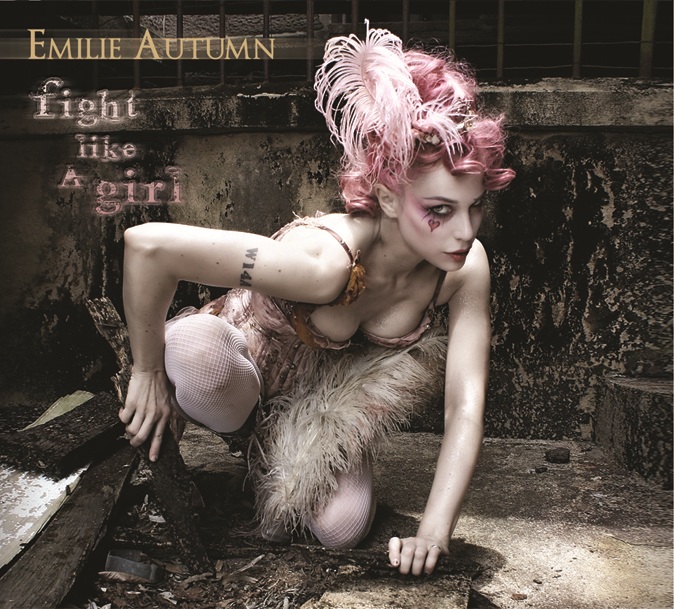 The last time Emilie Autumn released what could be called a “proper” album was back in 2006, when “Opheliac”, an album that redefined her image and style, was released. “Opheliac” was a turning point for EA, because it departed from the fantasy-based imagery that was featured in “Enchant”, and went into a darker style, both musically and lyrically, influenced by her bipolar disorder.

“Fight Like a Girl” (FLAG) is an album that not only continues on the same line of “Opheliac” in terms of melancholy, but actually devotes itself to the subject of mental illnesses. You see, back in 2005 EA attempted to commit suicide, which resulted in her being admitted into a psychiatric ward and being kept on suicide watch; influenced by this experience, she penned the book “The Asylum for Wayward Victorian Girls”, loosely based on her experiences in the institution which, in turn, serves as the basis for FLAG.

Emilie Autumn has been very clear that this album is nothing less than the basis for a musical that (as she mentioned when in we interviewed her) is to be premiered next year in London’s West End, and it only takes a couple of songs to realize that she is absolutely serious regarding this very ambitious project. Many of the songs, such as “Gaslight”, “Girls, Girls, Girls”, “Take the Pill” and, especially, “One Foot in Front of the Other”, were simply made to be performed as part of a musical, and to be played on a small club venue simply doesn’t do them justice (even if the performance is flawless and entertaining).

The songs tell the story of the “Asylum for Wayward Victorian Girls”, where sane women are unjustly institutionalized and systematically abused. While the plot is not particularly new ( movies like “One Flew Over the Cuckoo’s Nest” and “Awakenings” come to mind) nor its ending surprising, the way in which it is performed makes up for the predictability that is a trademark of musicals.

What bothered me about this album is thatEAseems to be playing every single character, which makes the story a bit silly at times, particularly when she has dialogues with herself. While it might be cheaper to record every part by yourself, the story (which, as a result, is hard to follow) would be conveyed in a much clearer way if you get at least ONE other person to do part of the dialogue. I know that there’s a feminist undertone to the album, but I hope they do hire at least one guy to play one of the men in the story, be it the human trafficker or the rapist doctor.

The bottom line is that FLAG is a good album, both musically and lyrically, even if it in terms of music it isn’t exactly what you’d expect from Emilie Autumn (her violin has been replaced by a harpsichord, except in tracks like “One Foot in Front of the Other” where classic violin is played). The story is interesting and its eventual set up as a musical is really promising. In a world where crap like “American Idiot” and “Mamma Mia” ended up as soldout shows, FLAG is a breath of fresh air.