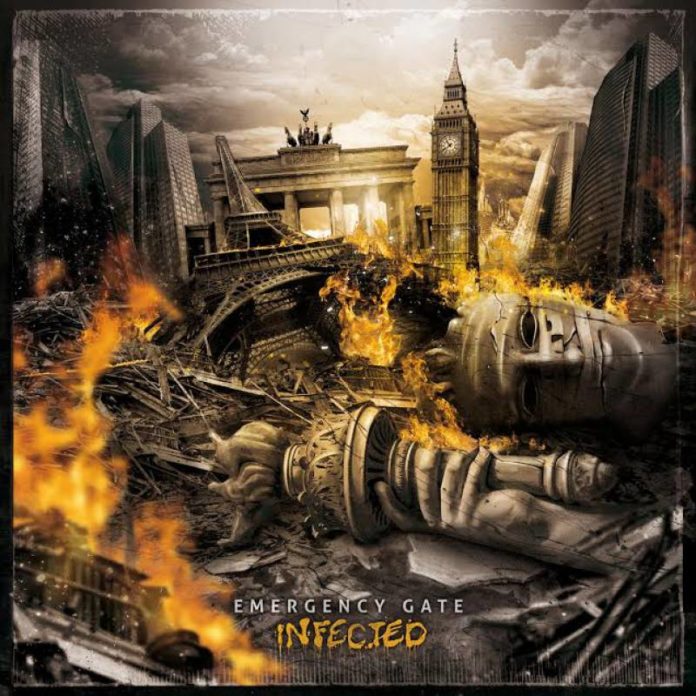 Maybe it was because of how low expectations were, caused by reading the band described as melodic death metal with “electronic and metalcore elements”, but Emergency Gate‘s latest album, Infected, was not nearly as bad as I thought it would be. It’s far from the best thing I’ve heard this year (or even this week) but it’s certainly not without its own charm and merit.

The first thing I feared was the possibility of terrible, “emo” clean vocals (see: Wovenwar) that so many bands in this realm seem to employ; thankfully, Emergency Gate seem to, for the most part, avoid that trap. One cliché the band does fall prey to, however, are these strange, pop-punky riffs sections, usually in intros to songs like “Going Under”, that feel really out of place in what is generally a fairly bruising metal album. Points for experimentation, but passages like these sometimes feel as if they’re tacked on and don’t serve any real purpose.

Although there are some good tracks, especially the opener “Sons of the Second”, with its beatdown, Arch Enemy-meets-Hatebreed verse section and anthemic chorus, the album also features what might be one be the worst song I’ve heard this year. “We Wanna Party” is just an great example of some of the worst excesses of metalcore as a genre, recalling lyrical themes of Hollywood Undead or Nickelback. Thankfully, this is the only track that explores that thematic territory.

The production on the record is competent, pretty much what you’d expect from a metalcore album these days; interestingly, the electronic parts come through very cleanly, sounding almost like a dance record. This choice creates a unique texture for the rest of the music, and which I don’t think I’ve ever heard on a metal record before. But then again, and to be fair, I don’t often partake of metal that includes these techno/dance elements, so I might be wrong on this.

Coming away from Infected I can’t say that there was too much that will stay with me, apart of the aforementioned “Sons of the Second” and some of the interesting ideas. Emergency Gate make use of a lot of strange tricks throughout the album’s run time and not all of them pay off. The result is a mixed bag that may be a good distraction for a listen or two, and to which only die hard fans of this sort of electro-metalcore will give more time or attention than that.

A mixed bag that will only really appeal to folks who are already huge fans of this kind of dance floor metalcore.
A fairly pleasant distraction
Doesn't fall in to the trap of using cheesy
Lots ideas being thrown around.
Teenage-boy vocals
You won't remember much of it
One legitimately cringe-worthy song
Pretty ordinary with regard to production
3