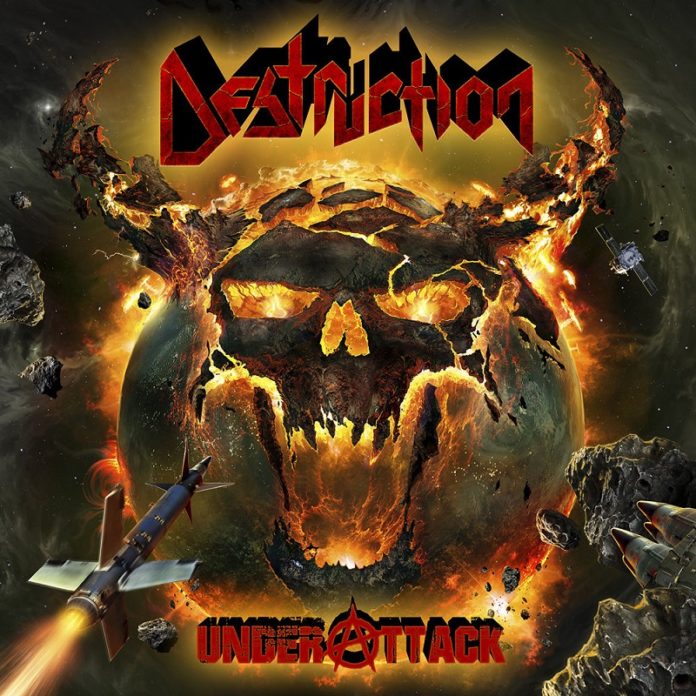 Destruction have long been my favourite band from Germany’s “Big Four”. Their talent for combining Maiden melody and gallop with the relentlessness of early Slayer has, since the band’s inception, provided listeners with some of the best Thrash east of the Atlantic. But over the course of their last few albums, like many veterans of the genre, they’ve spent much of their time recalling very specific past glories. Now, don’t get me wrong, Destruction is far better at this than most of their contemporaries, cracking out high-quality records that are still eminently listenable. However, the fact remains that Eternal Devastation and Release from Agony are records that already exist. Because of this, listening to Under Attack provides a pleasant surprise: the band’s re-alignment with the speed metal trappings of both their earliest works, as well as those of Schmier‘s amazing Headhunter project.

This is the most energized the band has sounded since 2001’s The Antichrist, and is quite possibly the best Destruction album of the 21st century. The production is stripped to basics, no bells and whistles, landing everything squarely between the eyes. This is evident from the outset, the title track tearing out of the gates, crushing skulls with precision riffing from Mike Sifringer and pulverizing percussive might from Vaaver.

Schmier‘s vocals and lyrics are on point, as he shrieks some of his most scathing indictments of the modern world. One of the great queues that thrash and speed metal has taken from punk rock is its conscience, and these are some of the best socially and politically aware lyrics in metal this side of Napalm Death. Everything from terrorism to the general decay in society is tackled, and done in such an intelligent and violent way that recent diatribes by the likes of Megadeth sound like a poorly researched sixth grade paper.

Under Attack contains the most exciting, cohesive performances of the band’s modern era. There is still no one who plays guitar like Sifringer, no one who plays bass like Schmier, and in Vaaver they have found a drummer whose cannonade fills pound every passage deep in the listeners psyche. By stepping back just slightly from the full-on thrash obliteration of some of their recent records, and reincorporating some elements from their earliest influences, Destruction have crafted an album that can go toe-to-toe with their classic records. Hell, it might even win the fight!

IN A NUTSHELL
Destructions reorientation toward their earlier, more melodic influences has created their most exciting release in 15 years.
POSITIVES
Sifringer's riffs and solos are incredible
Schmier's lyrics are on point
Vaaver drum work is pulverizing and consistently engrossing.
NEGATIVES
Leaves you wanting more

Angel Witch – As Above, So Below