It took 15 years, but what many thought impossible has happened. Demons & Wizards have a new album. While it may not live up to all the expectations that arise after one and half decades, it certainly is a worthy follow-up to the band’s original releases.

I first discovered Demons & Wizards because of a book. As I was making my way through Stephen King’s Dark Tower series, I found on Wikipedia that the singer of Blind Guardian and the guitarist of Iced Earth had made a bunch of songs about that story. As a fan of both bands, it didn’t take long before I tracked down a copy of Touched by the Crimson King, and immediately got hooked. The band seemed to play a darker version of power metal, combining some of the elements that Hansi Kürsch had used so well in Blind Guardian, with the aggression that Jon Schaffer had presented in Iced Earth.

Unlike many side projects, Demons & Wizards have never felt unnecessary, as they were more than just a watered down version of either Blind Guardian or Iced Earth. This continues to be the case in III, with songs like “Diabolic” (which links III to “Heaven Denies” from the original D&W release) and “Wolves in Winter” offering perhaps the best examples of the band’s ability to combine (but not copy) their musical backgrounds. They also show a great ability to play around with mood and intensity, slowly letting songs build up before unleashing their full power; this is noticeable in “Timeless Spirit,” which spends the first couple of minutes as a soft acoustic, rather pop-ish, guitar piece accompanied by Hansi‘s voice,  only to then become a more straightforward metal track (together with 80’s-style soloing), before winding down once again into that same soft guitar.

Since it’s been such a long time since their last album, III also offers an opportunity to quickly see how far both Jon and Hansi have come as musicians. Hansi‘s voice is really amazing, and the production really lets it shine brighter than ever. He also does a lot backing vocals (though several other singers also provide them), sometimes feeling like he’s singing to/with himself (this is really noticeable if you’re listening on headphones, especially on “Final Warning”). Though his voice sounds like it’s on a slightly lower register than it was 15 years ago, 2020 Hansi has nothing to envy from his 2005 or 2000 version. Maybe it’s the other way around.

For a band that usually played rather straightforward songs, III does mark a slight departure, with 3 of the tracks passing the 8 minute mark. In these songs (“Diabolic”, “Timeless Spirit” and “Children of Cain”) the band seems to have been too ambitious in their narrative desires, as the songs end up feeling feel simply too long. It’s not that they are bad songs, but rather that they would have probably benefited from some careful (and I’m sure painful) trimming down.

Despite its shortcomings, III is definitely an album that many metal fans will be able to enjoy. While those who follow Blind Guardian and Iced Earth will definitely find something to love here, the band has a much wider appeal than just their fan bases. From songs featuring mandolins and choirs (“Children of Cain”), others that really sound like something out of a Wasp record (“Midas Disease”), or AOR-anthems (“Universal Truth”) this is a release that has something for everyone.

Also, it might not be relevant for the review, and I’m not sure if they’ve expressly confirmed it, but I’m pretty sure Hansi (on the left) and Jon are supposed to be the two angels that appear on the cover. 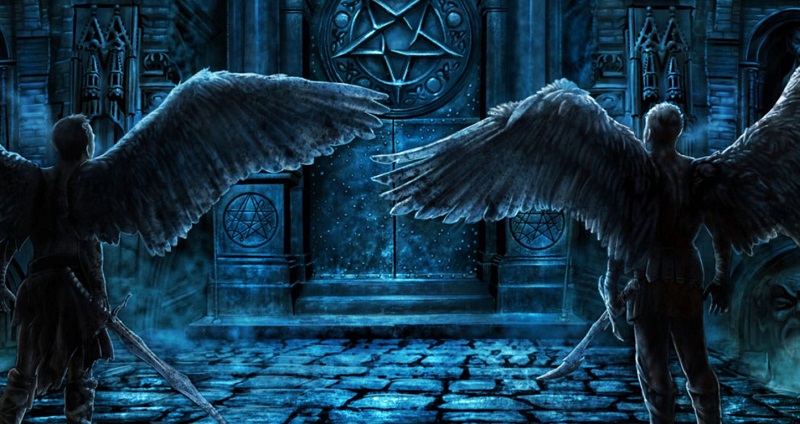 Demons & Wizards – III
THE BOTTOM LINE
After 15 years, Demons and Wizards return with a pretty damn good album
Reader Rating1 Vote
POSITIVES
Great skill to combine the strengths of Hansi and Jon
A lot of variety in the songwriting
NEGATIVES
Some of the songs feel very bloated
4