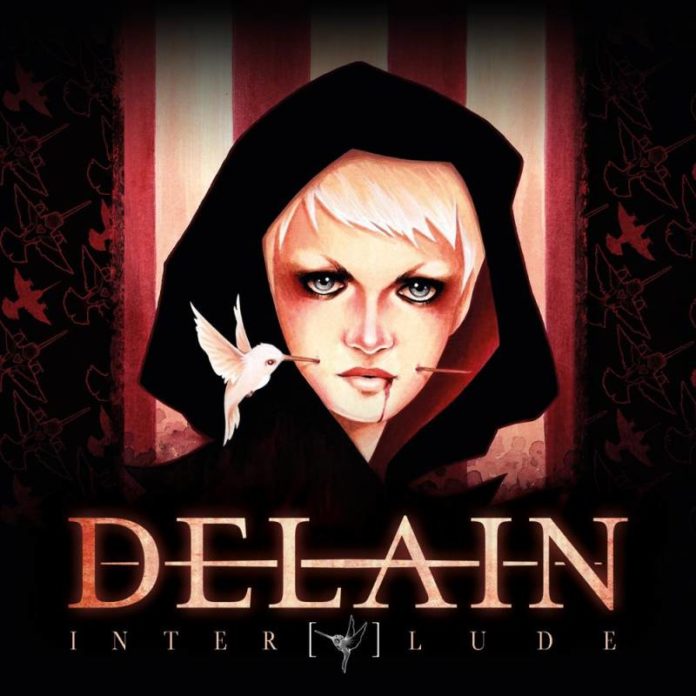 I actually fell asleep at one point.

That’s what this album was like. Interlude, a collection of unreleased material, covers and live stuff from Dutch symphonic metallers Delain, is my introduction to this act with ties to Within Temptation. Female-fronted symphonic metal is one of those genres, much like folk metal, that requires a good balance of elements to pull off effectively. You need metal, melody, talented musicians on all fronts, but especially out front on vocals. Cliché is very easy to fall into, as is the trap of making the front woman into too much of a focal point. Sadly, on this release, Delain doesn’t manage to rise above any of it, at least on the studio material.

The closest thing that I can equate this material to: Female-fronted Seether/Three Days Grace clone with some keyboards thrown in. That is what was provided by most of this album. It’s really a shame, because the collected musicians are clearly very talented: when the compositions allow them to shine, each member is able to show chops, creativity and even passion. But once they settle back in to each song’s groove, it’s all very ordinary, rock-radio fare. The most frustrating element of this is with vocalist Charlotte Wessels: While she is quite clearly a very talented singer, capable of great range and clarity, she doesn’t use it as she should, or could. Had she attempted lower lows and histrionic highs, she really could have brought these otherwise ordinary compositions to life. Sadly, it doesn’t really happen, and most of her vocal-lines are just as ordinary as the instrumentation underneath.

The covers, remixes, and unreleased material are complete throwaways, but things do liven up a bit on the live material. In fact it’s the live material that will keep me on board to check out more of their stuff. It is produced beautifully. This is what live stuff should sound like in 2013. Everything is crisp and clear, the crowd is present, but not overpowering. The mix could have been a bit louder, but the melody and beauty of the songs is still brought to the fore, and everything actually works (sometimes VERY well.). If this had been strictly a live release, its grade would have been MUCH higher.

But alas, the first half of the album isn’t worth the time. So while I feel like this may be a band to check out if you’re in to symphonic/gothic metal, please, for your own sake as well as the band’s, don’t start with Interlude.

I agree! It really sucks when an album, especially “limited editions” come with crap like that stuck on them. As a fellow collector of music, I’m really sorry to see that this happened to you and I appreciate that you took the time to leave your opinion here. Delain also did something similarly annoying with their vinyl for “We Are the Others”. While the golden vinyl is limited to only 500 copies (I don’t know if they released a “black” vinyl eventually) it doesn’t say anything like that on the sleeve, the record, an insert, nothing! Nor is it numbered…… Read more »

[…] to Delain wasn’t exactly a pleasant experience. It was last year with the release of their B-sides and live compilation Interlude and I was, plainly, less than impressed. However, I knew that a collection of songs like that was […]