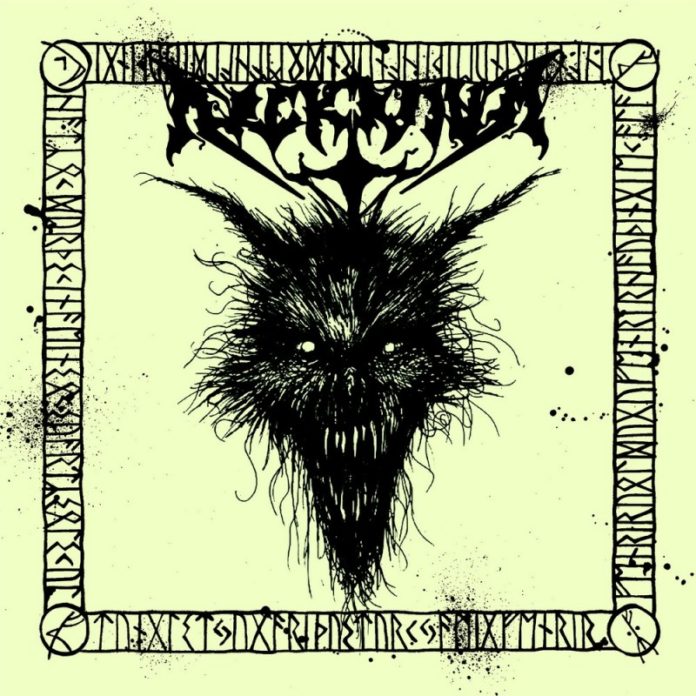 I travel a lot for my job, which means that I am behind the wheel for hours on end so I can get from Point A to Point B in a timely manner.  At one point in time I opted to see what Nashville, Tennessee could entertain me with on its airwaves, and as soon as I turned my radio to the FM dial it brought forth a scourge that I would not wish upon even my worst enemies: Christian bubble gum pop music.  I’m sure you can imagine the auditory holocaust that was bemoaning my poor sound receptors.  So, what should I listen to in order to purge this ghastly abomination from my brain?  Why, some deafening black metal, of course!  My weapon of choice, the newest offering from Swedish black metaller Arckanum, “Fenris Kindir“.

This is my first foray into the world of Arckanum, so I was really expecting to get really grim and necro within minutes of starting the album.  However, this is not what I found to be the case.

What “Fenris Kindir” ended up being was a test in patience; how long could I go on listening to something that was so flat and lifeless, yet still expect it to make me forget about the upbeat cancer I mentioned in the opening paragraph?  Through eleven songs you are treated to the fuzzy madness that oozes from the twisted mind of Shamaatae, and while I’m sure that all of this music comes from a meaningful place to him, a lot of it is just flat out boring to listen to as an outsider.  There are some really cool ideas that he incorporates into the music, particularly the intros, outros, and interludes in the music.  Other than those horrifying displays of ambiance and chanting, there is very little to dissect within “Fenris Kindir“.

The effort by Shamaatae is there, but I can’t help but feeling a lot of this music is very much stuck in the shadow of older Darkthrone and Gorgoroth.  Not only are those comparisons quite apt for “Fenris Kindir“, but the aforementioned bands did it better on their respective albums “A Blaze In The Northern Sky” and “Pentagram“.  This isn’t helped by the momentum brought forth by introductory track ‘Fenris Kindir Grua’ was quickly squandered into nothingness at the beginning of ‘Tungls Tjugari’.  When your music comes in with nary a whimper after the first track, you know you’re in for a very rough ride.  There were parts of the music where you would only hear Shamaatae gurgling out something on top of some light noise, and at first I liked what I was hearing, but then it just goes on for far too long and the enjoyment stops.  This is all “Fenris Kindir” has to offer, and it is quite difficult to try and make as many words with my fingers to help describe my boredom.

Much like the lackluster musical performance, the production values had very little to offer as penance to its listener.  The guitar was incredibly thin, the bass drums sounded like toddlers having a pillow fight, and Shamaatae’s vocals were a bit over-powering at parts.  The only compliment I can give is to the way the bass guitar was mixed.  It was at the forefront of the music and did not languish in the fetid mediocrity of everything else put around it.  So… yeah…

God damnit, I can’t do this anymore.  Arckanum seems to have the same issue that bands like Tankard do where they end up putting out a new album every year or two, and in the end you get a shoddy product that the creator thinks too highly of himself to actually sit down, listen to the final product, and realize there is actually very little there for the listener to digest.  The ultimate test for a black metal album in my mind is to go head-to-head with the Christian bubble gum pop I said in the beginning paragraph, and it failed miserably to hold up its end of the bargain.  Not once did I ever wish I was listening to that Christian tripe over the dulcet black metal tones, but I ended up regretting my choice of which album to put in.  In summation, “Fenris Kindir” is very, very boring and about as threatening as this little dork spitting with Havohej playing in the background (seriously, black metal is fucking hilarious for dumb shit like this).  You might as well just stick to the black metal you already know and love, because Arckanum is not going to show you some secret path where all of the awesome and underground black metal go to roam free.