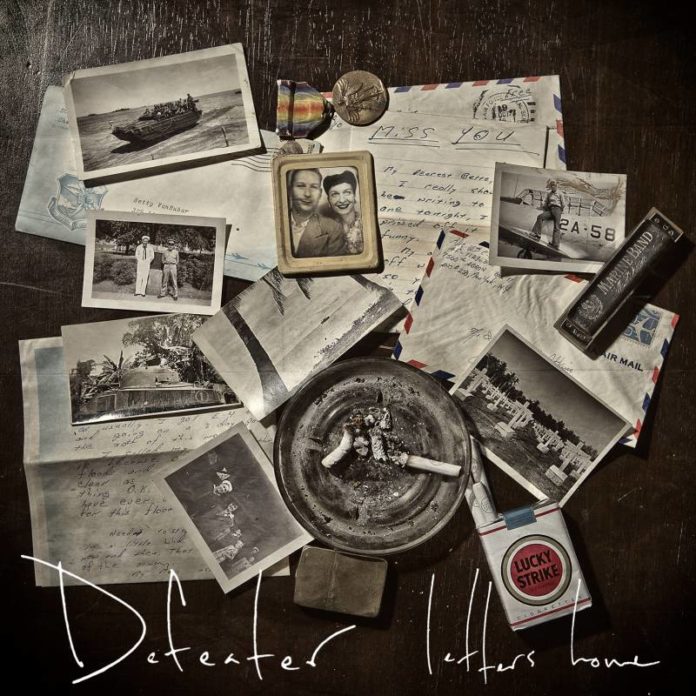 Sometimes, you’ll listen to an album that’s full of “almost”‘s. Letters Home by Defeater is unfortunately one of those. Letters Home can never seem to slap it all together at the same time – you’re almost always left with this lacking feeling of what could have been. It’s rare that I feel this way, but Defeater are seemingly missing some of the key ingredients to making a good album; it’s just never interesting enough to keep you paying attention for that long.

Letters Home is just a mixed bag all over. For every good element that Defeater brings onto it, an equally bad (or worse) one is present. Let’s take vocals, for example. I genuinely like the vocals on Letters Home – they cut sharply through the sound stage in the right sort of way, and they sound backed with the right amount of emotion. This helps it avoid sounding like some sort of hardcore-screaming robot is behind the mic, like the person behind the microphone actually cared about the music. This is great, because there are plenty of bands where it sounds like the vocalist is just mailing it in with generic growly vocals so he can get it over with and go take another bong rip. Some of the lyrics, however, are just downright embarrassing. There are parts of some songs that are just cringe-inducing to listen to. Take the opening song “Bastards” for example. This song is pretty good -right up until the end at least: where the eye-rolling lyrics of “AND STILL ALL I SEE IS THAT BASTARD IN ME” repeat over and over for about thirty seconds. After about the ten second mark, it stops being “unique” and “emotional” and just starts being annoying.

Similar moments appear on both “No shame” and “Hopeless again”, so this isn’t just a one-off thing. The whole middle section of “Blood in My Eyes” sounds rather awkward and out of place. It just keeps happening over and over on Letters Home. What makes for a frustrating listen, however, is that there are a select few songs where everything comes together and sounds great. “No Faith” is a damn good song – strong from start to finish. It makes you wonder where the hell it came from, because if the rest of Letters Home was as good as “No Faith” this review would have a much different tone. Throw “Dead Set” into the mix also; it’s just genuinely good. The few tracks that are good, are unfortunately drowned out by the rest.

Guitars follow the narrative set by the rest of the album – mediocre at best. Sure, there are a few good moments; the opening of “Rabbit Foot” for example. But they’re so few and far between that you would have been salivating at the first interesting riff you heard at that point. Drums are the same story – very few liberties are taken with them. It’s just hard to understand what Defeater is trying to do on this album. Having listened to Empty Days and Sleepless Nights with semi-regularity since it’s release a few years ago, it’s hard to put Letters Home as anything but a disappointment. Empty Days showed a lot of elements that Letters Home does not – creativity with it’s pseudo double-album approach, great riffs, and interesting music that compelled you to keep listening. The two or three good songs on Letters Home does little to salvage the rest of the album.