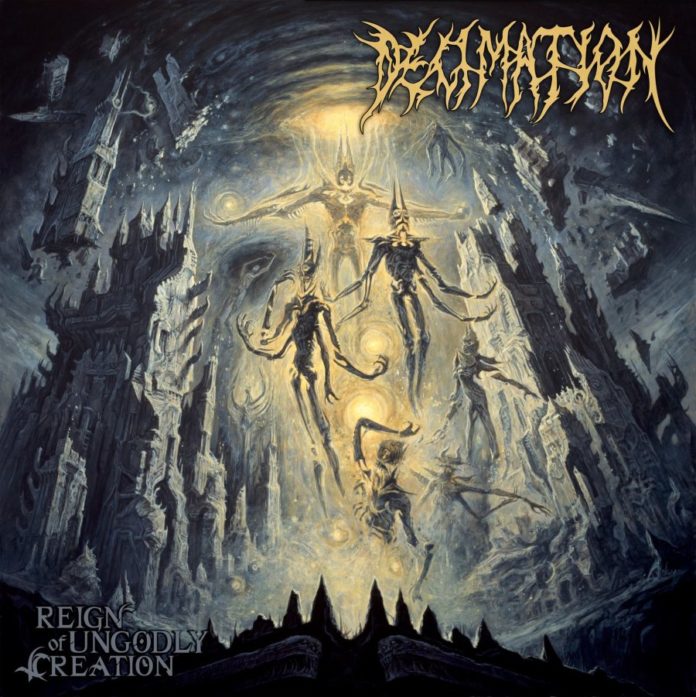 Metal has never been the same since the release of Effigy Of The Forgotten by Suffocation, back in 1991. They took the technical side of Death’s music it and injected it into a super heavy grindcore influenced form of death metal that was later dubbed “brutal death metal.” Countless bands since then have built on that foundation, and have pushed the genre into exciting new directions, in terms of technical proficiency and sheer brutality.

Reign Of Ungodly Creation is the third full length release by Turkey’s Decimation (a quick search shows that there have been at least 5 bands in the USA alone named Decimation), and it showcases an extremely technical version of brutal death metal. The songs are fast, frantically paced, with multiple changes in time signature, loaded down with a huge dose of chugging low-end riffs and guttural growls that Suffocation fans will certainly enjoy. For the most part, Decimation prefer to pummel the listener to death with fast, technical songs in the vein of Deeds Of Flesh and Decrepit Birth, but songs like “Ghoulish Requiem for a Macabre Daemonarch” show that the band knows how to keep things heavy as well. There are a few slower moments, like the mid-paced death march on “Psalm Carnage in the Ghoulish Chapel of Gehenna,” which almost goes into progressive territory with its odd time signatures.

Lyrically, Decimation focus on Sumerian mythology, and has some pretty long song-titles, like “Aberrant Ablution by Filthy Excrements of a Grotesque Crassamentum,” which is quite reminiscent of Nile. If you’re into Nile’s lyrics and highly conceptual approach, there’s some pretty interesting stuff here that fans might enjoy, though the two bands are pretty different in terms of sound.

Reign Of Ungodly Creation is a pretty heavy slab of brutal/technical death metal, but there are a couple of bones I have to pick with the production. First off (and this is pretty prevalent in this type of death metal) at times the drums are just entirely too triggered and thin-sounding, especially when the drummer goes into a straight blast-beat section. Also, there IS a bass player in the band, but you have to really pay attention to find him, since the bass is buried under layers of guitar, vocals, and loud snare drums. it is only when Decimation slow down a little bit, like on the particularly brutal final track “Veracity In Relics,” that it’s possible to pick out the separate instruments. Still, Reign Of Ungodly Creation is pretty much par for the course in this genre as far as production, and fans will find that Decimation will fit in nice and neat with the rest of their brutal/technical death collection.

Malodorous – Augury Of The Aborted