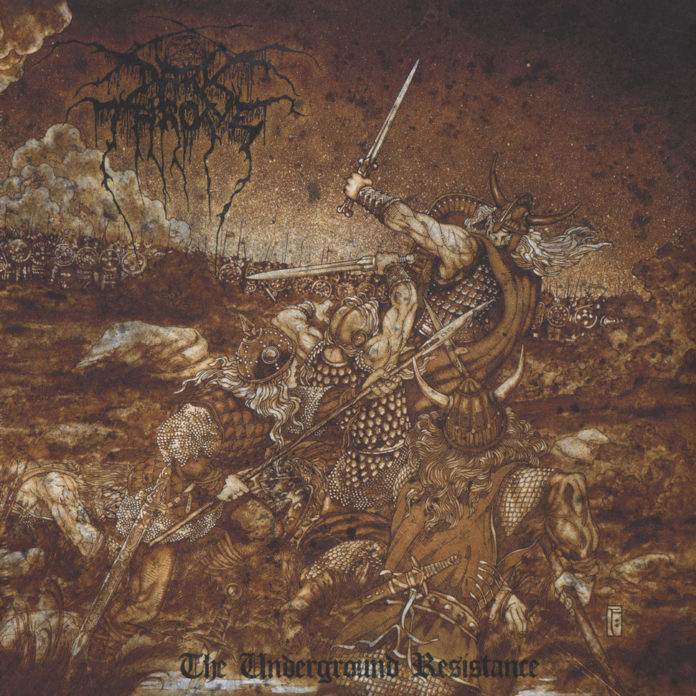 Over the entire vicious cycle of the Norwegian black metal scene, Darkthrone has consistently proved themselves to be far above the fold. With fifteen albums under their belt over a career spanning almost thirty years, they’re a quintessential part of heavy metal history. One of the most impressive things about them, I think, is that they’ve managed to make phenomenal records across the entirety of the extreme metal spectrum – you’ve got your Soulside Journey melodic tech-death, your Transilvanian Hunger vberkvlt black metal, your Cult is Alive/F.O.A.D. crust punk, and even classic thrash/speed metal on Circle the Wagons. The best part about their eclectic bounce between styles is that they’ve mastered pretty much any genre of music they decide to tackle; I think it’s safe to say that I’d buy the newest Darkthrone no matter what, even if they started playing fucking klezmer.

With their newest opus, The Underground Resistance, our favorite pair of fellas from Kolbotn aim to tackle the classic NWOBHM sound of groups like Saxon, Manilla Road, and even the mighty Iron Maiden. It’s a far cry from the classic black metal sound of Under a Funeral Moon or Panzerfaust, but it’s way more of a blast to listen to. It sounds like a blast to play as well – if there’s one thing that the newer Darkthrone recordings communicate, it’s just how much they fucking love their new sound. It’s a damn shame they don’t tour anymore; the pits that these songs could inspire would be ridiculous. From the opening rapid-fire bass attack of “Dead Early,” The Underground Resistance bursts out of the gates like a furious steed frothing at the mouth, and the momentum continues all the way through until the last flagon-raising moments of the fourteen-minute (!) closing epic “Leave No Cross Unturned.”

The album bounces back and forth between two main styles of metal overall. There’s the crustier Nocturno Culto cuts like “Lesser Men” that groove with a dissonant Celtic Frost sense of riffage and gravelly low-end vocal growls. Balancing this out are Fenriz’s contributions, which he perfectly described as “Riders of Rohan metal.” These are high-speed galloping metal anthems of the Old Guard with plenty of King Diamond falsettos to shriek along to. A banner-raising war paean like “Valkyrie” would easily be the highlight of any lesser band’s album, but every song on The Underground Resistance is so killer that even asskickers like that are overshadowed by “Leave No Cross Unturned.” Seriously, that track is a goddamn masterpiece! I think the only real complaint I have about this album is that it’s way too easy to tell who wrote what, so the album has a bit of a bipolar nature to it. The two styles work really well when placed in conjunction with each other, however – I think an entire album of Culto-crust would just start to bleed together after a while, and two LP sides of Fenriz’ soundtrack to the Battle of the Pelennor Fields would be straight-up exhausting.

And if you’re not a fan of Darkthrone, as always, YOU CAN FUCK OFF AND DIIIIIIIEEEEEEEEEEE.