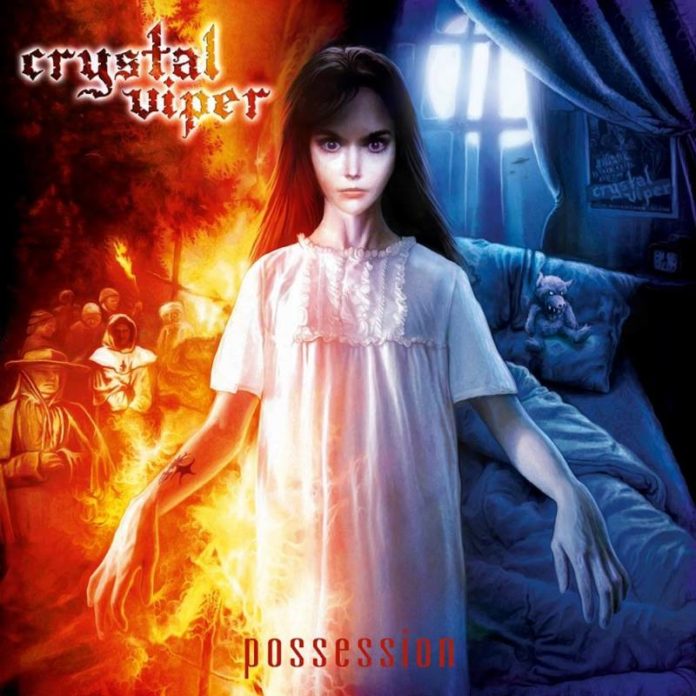 Crystal Viper is pretty much the definition of a hard working band. Hell, six albums in six years is bordering on masochistic ((In fairness, one of them is a live album)), especially when the band is spending so much time on the road. It’s not hard to see a legacy beginning to take shape.

This is a band that is following in a fine tradition that hasn’t really been prevalent in a long time: the tough-as-nails female front woman. Stylistically sitting between Doro Pesch and Holy Moses‘ Sabina Classen, CV‘s Marta Gabriel is a fine addition to that family tree. Her roar is a powerful one that allows the songs on Possession to carry a conviction and sense of purpose not unlike Manowar. In other words, it’s miles away from the Sirenias and Within Temptations of the world.

A more tangible similarity to Manowar is the buzzing, cutting bass guitar tone. At first I wasn’t a fan of these textures, or the overall sonic palette. I’ve come to feel after a few listens that the production choices contained here (courtesy of Bart Gabriel) reflect a love for 80s proto-power metal bands like Jag Panzer. When approached in that fashion, it’s actually quite refreshing to know that Crystal Viper is, by recalling these unsung underground bands in subtle ways, making sure that they don’t sound like anybody else in their chosen metallic realm.

While I’m not a huge fan of the concept they’re working with on this record (a possession plot not dissimilar to the many exorcism films out there) I’m sure many people will find it really enjoyable. More important than that: the songs are catchy, fist pumping, and sharp. There aren’t really any super-fast tracks on here, certainly nothing approaching thrash, and the album is better for it. These are anthemic heavy metal songs with an emphasis on the chorus, clearly made with crowd participation in mind.

There’s really not a whole lot more to say about Possession. It’s unique it today’s metal landscape for sure, but achieves this by resurrecting old traditions more than anything else. It’s competently recorded and written, with songs that anyone into traditional metal should enjoy. Marta Gabriel really is this band’s greatest asset, as she is nothing like the many siren-song opera singers that most people associate with female-fronted metal today. She’s a tough as nails metal vocalist in the fine tradition of the aforementioned Doro, but also Hellion‘s Ann Boleyn and Zed Yago‘s Jutta Weinhold. In other words, much like those women, she could probably kick your ass.