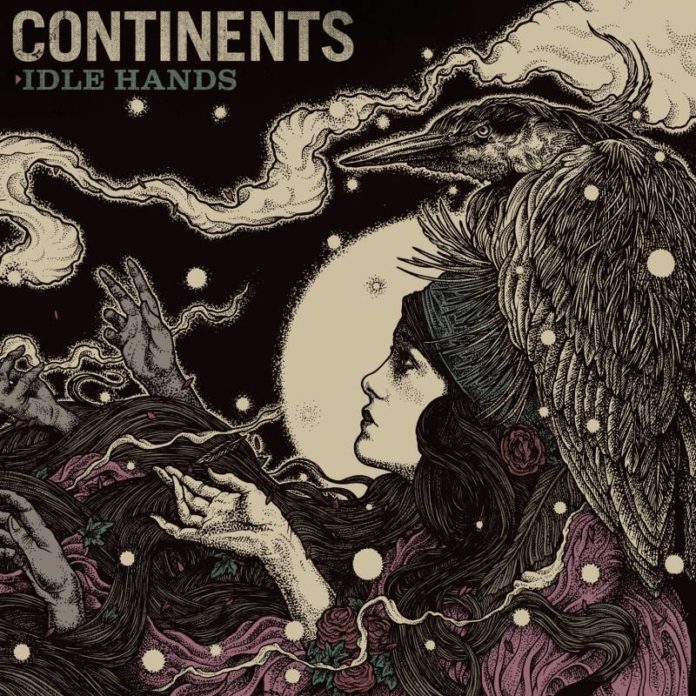 Victory Records sure has been snatching up a number of bands lately. You have God Forbid, Terror, and this little band right here called Continents. The whole “post-hardcore” or “post-metalcore” genre has really taken off these past few years – there are probably triple the amount of these types of guys that there were five years ago. So, as you can imagine, the signal-to-noise ratio is quite high these days. Luckily, Continents starts 2013 off with a respectable effort. It’s definitely not without it’s flaws, but any fan of the genre should be able to overlook them and enjoy the album.

So, what are we dealing with here in Idle Hands? Well, Continents manages to put together a pretty good post-hardcore album in the vain of Counterparts. If you’re not familiar with this type of music: it’s a mix of metalcore and the melody and soundscape that comes with post-rock. Together, they make a fairly potent combination – just listen to the classic Misery Signals album Controller; since that’s the bar all these types of albums are compared against. Idle Hands seems to lean a bit more towards the metalcore side of things than most other bands in the genre, but in this case I think it’s a good thing. It makes the more melodic parts of the album stand out more than they would otherwise, and gives them a little more oomph when they do hit. Quality wise, the album seems to be a little bit of an up and down affair. Songs like “Pegasus Pegasus”, “Land Of the Free” and “Trials” are either very good or outright great, but others like “Idle Hands” and “Exhale” just fall flat. The latter are repetitive in nature and just outright boring – which is a real shame because as a whole, it drags the album down. I will say that Continents certainly knows how to do an instrumental track; “Loathe” has a great buildup and great finish to it that really helps setup the mood of the last few songs on the album. That’s really the most frustrating thing about this album; it does so many things right but the consistency problems spring up too often to simply just ignore them.

The production on Idle Hands is, for the most part, good. I would have liked a little more differentiation between instruments and vocals when things get crazy; a good example of this is the opening to “Land Of the Free” in that it gets a little hard to distinguish between the separate elements at times. It’s not a major problem; but it does creep up at times. The guitars in most of the songs are great; I mean just check out the middle of “Trials” when the melody changes. That’s some catchy shit right there. Drums are serviceable for the most part; I certainly wasn’t blown away by them but that’s kind of hard to do in this genre anyway since it’s so guitar driven. The sparing use of double pedals is actually pretty nice though, again it helps them hit harder when they are used. Vocals are okay, but the clean ones are…bad. Luckily they’re very rare (I’ve listened to the album over five times and can only remember them being used once or twice at the most), but it’s definitely not a strength of their’s.

I’m going to guess that this album will help Continents bring in a lot of new fans; Idle Hands is a remarkably solid outing for this group. Even with the few clunkers they got on here, I’d say Idle Hands is a good way to start this genre off in 2013. If you’re curious, check them out. You’ll probably end up liking what you hear.