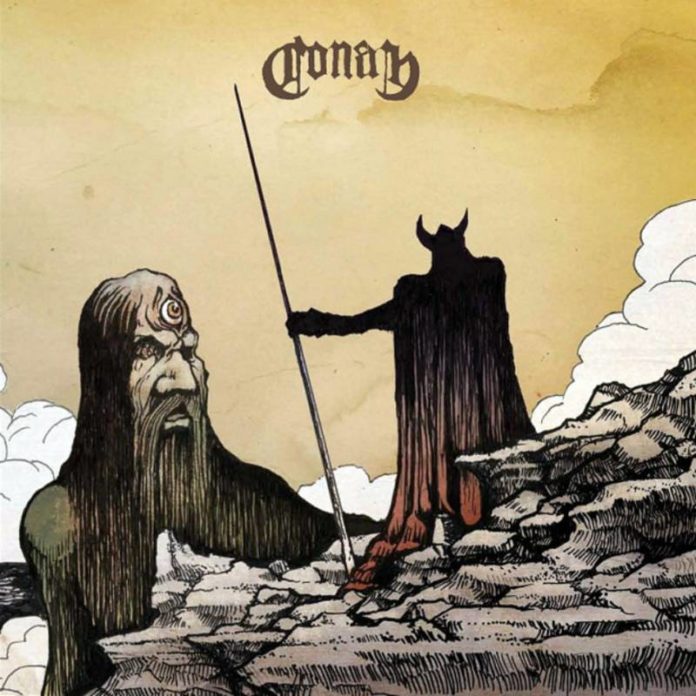 There must be something in the water in Liverpool. Aside from bestowing upon the world one of the single greatest, universally-acclaimed, beloved, and influential musical groups of all time,* they’ve also given us an excellent doom metal group in the thunderous power trio Conan. For the past six years, the men of Conan have attacked their instruments with a blunt, savage, caveman-esque force worthy of their namesake, and Monnos is probably their most cohesive work so far. And let me get one thing clear before I go any further with discussing the album: If you’re looking for shredding solos and astounding musicianship, get the fuck out. This is monstrous, fuzzed-out barbarian metal, with chunky riffs and lumbering beats more suited to Frank Frazetta paintings and lava lamp-aided smoke sessions than endless hours of practicing sweep-picking in a Sam Ash in the vain hope that a ~*~metal grrrl~*~ will walk in and catch your eye while you’re right in the middle of mangling some John Petrucci riff. This bears a lot of resemblance to the early head-nodding works of High on Fire, the fuzzed-out jams of Electric Wizard, the groovy misanthropy of Ramesses, or the mantras of Om in that if you’ve never had your brain cells bounced around by foreign substances, you probably won’t enjoy it at all.

This may be slow and plodding music not unlike the footfalls of everyone’s favorite Hyborian, but it is not stupid. Not by any means. Every angular guitar chord, every pulse of the bass strings, every drumhit, and every screamed vocal line is expertly calculated with an almost Broadrickian sense of maximum brutality per second. Every aspect of instrumentation seems to be treated more as percussion than a guitar, a bass, or a voice – the result is an expertly-crafted piece of banner-raising war metal well suited to trudging through the snows of Cimmeria and chopping down some punk-ass wizard. The vocals howl above the clamor in slow chants, as instantly memorable phrases like “These skies are dead” or “Swift death in flight” rise through the tumult like smoke from the battlefield – much like High on Fire, these guys know that crafting good metal lyrics is not a matter of poetic skill, literary immersion, or some overwrought over-arching conceptual theme, but rather from having a sense of what sounds coolest when screamed at the top of your lungs. Aside from the menacing magma crawl of the instrumental “Golden Axe,” the other five tracks on the album follow the same basic pattern and alternate between thunderous mountain-crushing sludge (opener “Hawk As Weapon” and closing “Immortal Throne”) and a relentless forward gallop (“Grim Tormentor” and the aptly-named “Battle In The Swamp”). For those who aren’t (yet) fans of this style, the album may seem to run together and plateau a bit too much. But for the seasoned acolyte of doom, Monnos will surely enter your top albums of the year so far. Here is found the soundtrack for your next smoke session, your next long drive, your next journey through Skyrim, your next game of Dungeons and Dragons – to put it simply, Conan delivers. This is their best and most cohesive release yet, and if they can maintain this forward momentum they’re sure to be as unstoppable as their namesake.

*I’m speaking, of course, of the Quarrymen.