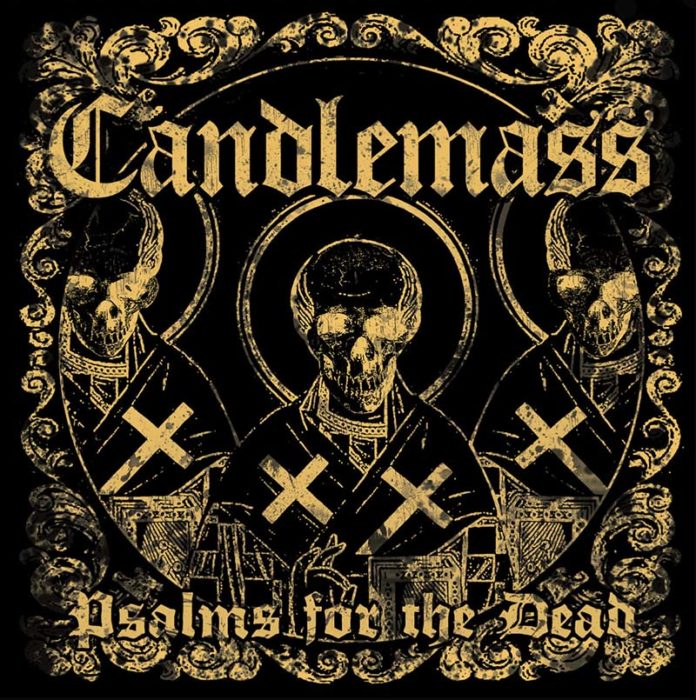 It’s impossible not to know doom metal without knowing Candlemass. Originally formed in 1984 in Sweden, the band arguably coined the very name “doom metal” on their debut LP, the landmark Epicus Doomicus Metallicus. Ever since, bassist and bandleader Leif Edling has shepherded an ever-shifting lineup of musicians through one of the longest and most illustrious careers in heavy metal, from the classic Messiah Marcolin-helmed lineup that sparked Nightfall and Ancient Dreams to their most recent incarnation, fronted by Rob Lowe of Solitude Aeturnus. Their first album with him after reuniting, 2009’s King of the Grey Islands, was easily one of my favorites of that most excellent year. And on Psalms for the Dead, their most recent sacrament, the ancient gods prove that there are still none who can craft a funeral dirge quite like them.

One of the things that stands out on first listen is the prevalence of keyboard on just about every track – it usually pops up in the form of a church organ, which gives the album even more of a religious feel than most Candlemass works. I’ve been a sucker for dramatic organs ever since I first heard Bach’s “Toccata and Fugue in D Minor” in kindergarten, but if it’s not your thing then you clearly have no business judging what constitutes “heavy” music. But good doom comes from riffs, and this album’s got them in spades. From the horn raising-opener “Prophet” to the closer “Black As Time” – highlights including the groove-tastic single “Dancing In The Temple (Of The Mad Queen Bee)” and the absolutely massive title track – there’s no mistaking that this is a riff-driven monster of a doom record. Every ditty worms its way inside your brain like Nidhogg gnawing through the roots of Yggdrasil, easily demonstrating why Candlemass has been held up as such a paragon of doom over their career. The band makes sure to keep a variance in speed and song structure, ensuring that the listener doesn’t nod off to an album that sounds like one long funeral march to oblivion. Rob Lowe’s vocals are an excellent operatic baritone that lends all the trademark Candlemass gravitas to the songs, while the classic lineup displays a perfect synergy that one would expect from one of the oldest and most venerable doom institutions. From the juggernaut trudge of Jan Lindh’s drumkit to Lasse Johansson’s shredwork (and Edling’s riffs, of course!), every song fits together like a perfectly-assembled jigsaw puzzle in terms of arrangement. No member eclipses the rest of the group, instead striving to better the band as a whole.

The only real downside to the album, aside from the unnecessary and melodramatic monologue that opens “Black As Time,”* is that the band’s announced it will be their last. After kicking out Rob Lowe earlier in the year, their future remains uncertain – a new vocalist has been recruited and an upcoming tour is all but assured, but the news of an album being a band’s swan song is always hard to take. But damn, what an album to go out on! It might not be as sky-cracking as Epicus or as “bewitching” as Nightfall, but Psalms for the Dead is a pretty perfect capstone to one of the most consistent, respectable, and illustrious careers not just in doom metal, but in the entirety of heavy metal itself. It proves beyond a shadow of a doubt that Candlemass can not be surpassed – not now, not ever.