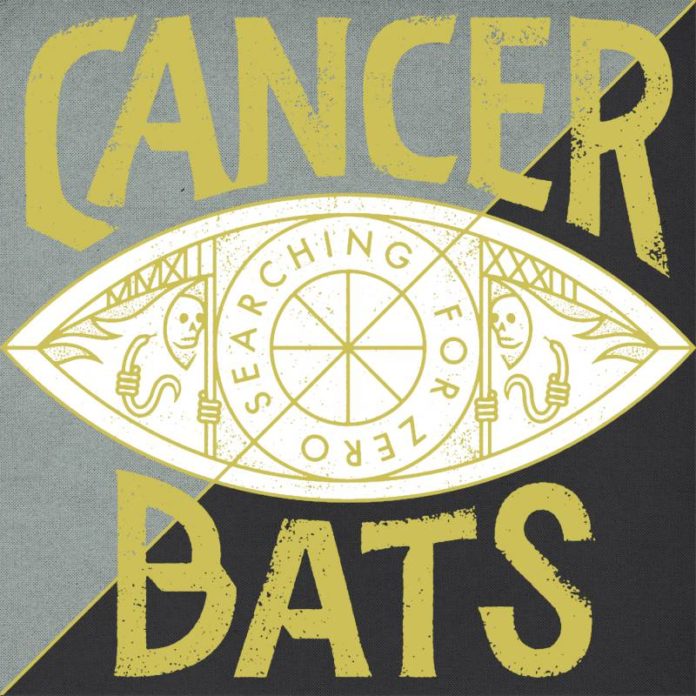 For punks, authenticity is key. So when Toronto hardcore giants Cancer Bats announced their fifth studio LP was to be recorded with multi-platinum producer Ross Robinson, many fans, still clinging onto the band’s punk roots, felt their hearts sink. They knew that one of the few contemporary hardcore bands to break through into the mainstream would now join Robinson‘s prolific catalog, together with the likes of Slipknot, Korn, Limp Bizkit and, most disconcerting of all, Vanilla Ice.

But don’t give you straight-edge and HXC tattoos the laser removal treatment just yet! For Searching For Zero, Robinson has taken the Kurt Ballou gold-standard approach to hardcore production, sounding crisp and clean but with a tinge of what your local scene bros will praise for being ‘raw’ and ‘lo-fi’. So, no, they haven’t sold out just yet, and they keep in touch with their roots (which aren’t limited to punk).

A couple of years ago, Cancer Bats set out on a string of giddy, schoolboy-esque hero worship gigs as a Black Sabbath cover band under the devilishly silly pseudonym of Bat Sabbath. And it shows. While the riff-oriented direction of blues and stoner metal has been an aspect that have kept the band’s popularity accessible to the mainstream and afloat throughout their career, this time around the bleaker, sludiger influences of their doom forefathers is a much more prominent muse for many of the songs; this is especially visible in the case of ‘Beezlebub’ and ‘Cursed With A Conscience’, where Sabbathian funeral dirges are mixed with NYHC-esque grooves and gang vocals, exuding a unique primal energy which reaches out beyond the demographics of hardcore. Most rewarding of all is how well their songs are paced and how the two seemingly-polar opposites of doom and hardcore make surprisingly comfortable bedfellows in the hands of some more-than-competent songwriters. In layman’s terms, it’s less powerviolence, more power chords.

When it comes to the lyrics, the Bats are still no J.R. Hayes in regards to spinning a good lyrical yarn. ‘Arsenic in the Year of the Snake’ boasts the band’s usual tricks of slapping together a cool-sounding lexicon of dangerous animals and references to the occult in a fit of cathartic self-expression. Which is fine. Lyrics aren’t always a primary focal point in hardcore, and they still conjure up some evocative imagery to fit the instrumentals. And yet, they do feel far too vague and incohesive to have any real substance, plus some of the lyrics are just plain awful, with vocalist Liam Cormier belting out how ‘bad vibes [are] thrown around like a hurricane’.

While previously being billed as ‘Converge-lite’ for metal kids, in Searching for Zero the Bats have gracefully spread their wings in terms of influences and songwriting. They switch back and forth between classic Void-esque metalcore, mammoth doom, and groovy, tough guy hardcore. They manage to channel the chaos of both their predecessors and contemporaries with enough instrumental and vocal talent to juggle all their influences to give the record a sense of serious dynamism and character, all of which sets it far apart from previous releases.

Huge array of influences.
Dynamic and fresh.
The band falls short on some of the songwriting aspects.
3

Helloween – My God Given Right