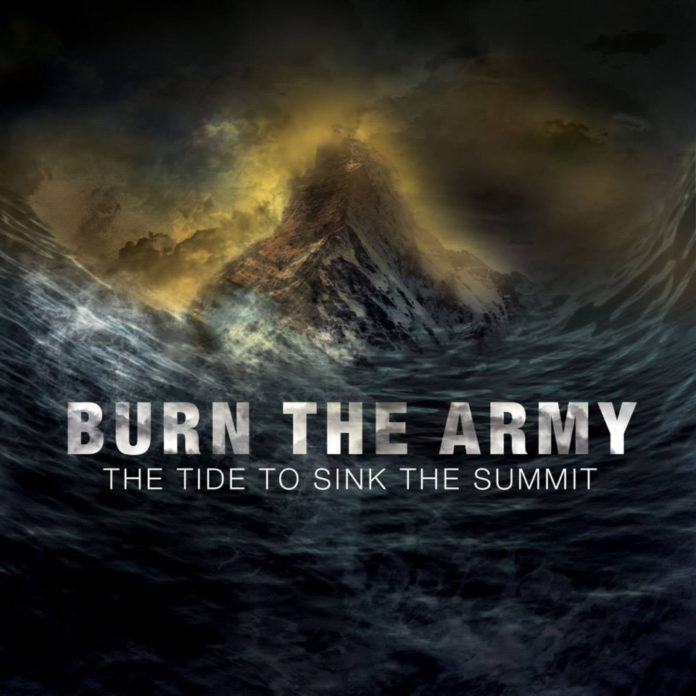 When Isis emerged from the underground metal scene in the 90’s, they brought with them a new, highly experimental, approach to song-structure in metal. Elements of progressive rock, hardcore, jazz, and post-rock all fused into a new and exciting sound, dubbed “post-metal.” Isis have inspired a multitude of bands, and are continually cited as an influence by new and emerging bands, despite splitting up over 4 years ago.

Burn The Army play a form of post-metal that is very reminiscent of Isis’ approach to structure. The Tide To Sink The Summit quickly makes an impact, and will have post-metal fans foaming at the mouth. There are moments of colossal heaviness, as well as moments of serene beauty, and plenty of dynamic changes in time signatures and tones. Vocals alternate between guttural hardcore yells and emotionally riveting clean singing, which pair perfectly with the music. I’m often reminded of Panopticon-era Isis, but there are also elements of other genres that you don’t hear, even on an Isis record. “Sea,” for instance, has a lot of math-metal moments, with jagged guitars and jazzy time signatures that remind me of the early material by Botch; “And” sticks to a quieter guitar tone, similar to Mogwai, though the bass work at the beginning manages to still give an air of aggression, with its pulsing off-time rhythm and overdriven tone.

The shifts from light to dark tones are done with laser-precision, and left my jaw on the floor when I realized that The Tide To Sink The Summit is Burn The Army’s first release. The chemistry between band members, the absolutely fantastic production, all of it sounds like a band that has had years and years developing their sound. Just listen to the change from melodic hardcore, to chaotic math metal, and then super stoner-sounding sludge riffing on the final track, “End.” In less capable hands, it could have come off as really disjointed, and would probably fall apart, but Burn The Army are obviously master craftsmen. This will be a band to look out for, and I expect to hear great things from them in the very near future.