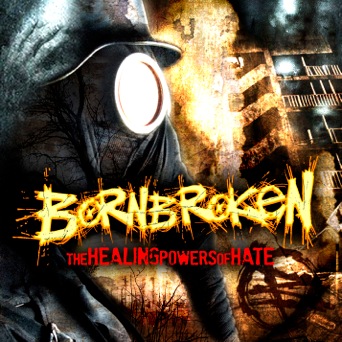 In the realms of thrash, pushing the envelope can be a difficult thing to accomplish, since few of the core elements can be changed before you are no longer playing thrash at all. Faster and heavier guitars? More furiously-pounding drums? Sound more or less like Slayer? Born Broken’s answer to this question was to add a story, and I use the term loosely.

Don’t get me wrong, The Healing Powers of Hate is a moshable album, but that’s really all that can be said about it. It brings nothing new to the table for thrash, quite possibly devolving from it as guitar solos are nearly nonexistent, opting instead for what sounds like the same heavy riff played over and over again at different tempos, occasionally throwing in a really gross core breakdown. Even within the album, there are no signs of development from song to song, making the whole thing become this primordial soup of thrash that no life form will ever crawl out of.

At times there is a slight glimmer of hope that maybe they’ll try something new, a dirty bass line will kick in for a few seconds, the guitars will actually try a slightly different, more complex passage for a couple bars, and at one point there was something that almost sounded like a Joe Satriani solo. These moments are quickly washed away by the singer shouting into the mic with his core vocals and the guitarist and drummer resuming their caveman marches. The band claims that their singer, “can be distinguished from the rest,” which is hard to believe as he can barely be distinguished from song to song as he attempts to be edgy singing the story of some generic apocalypse and the downfall of humanity. The whole story just seems copied and pasted from Iced Earth’s Dystopia, except poorly executed.

Overall, the sound is decent enough to get heads banging and bodies moving, but that can be said for countless bands. Everything about the album just feels uninspired, from the lazy guitar work, to the incessant unchanging vocals, to the overused themes of hate and anger in their supposed “story.” There is so little development in the album that if you took one track and looped it for forty minutes, you would essentially have the same experience.