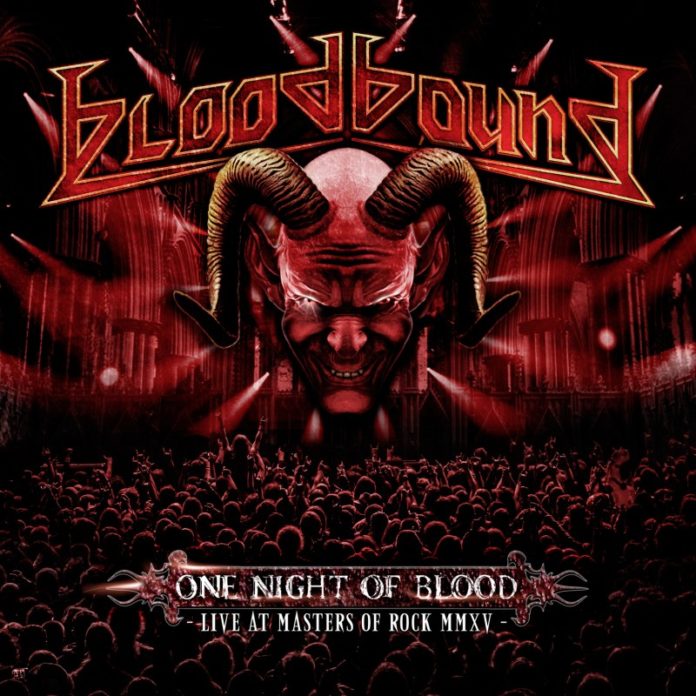 Fading into the enthusiastic sounds of the attending crowd at last year’s Masters Of Rock concert in the Czech Republic (celebrating the first decade of the band’s existence), Bloodbound tease things out with a (possibly sampled) intro before launching off into the hour-plus performance. Playing in the mode of power metal with a healthy splash of fantasy, the performance is driven by versatile drumming, trilling keyboard, high-speed guitar and bass, and vocals that seem to have studied well the ways of Rhapsody of Fire and similar acts. Demons, warriors, honor, dragons, fire, kingdoms and mystical pacts provide the subject matter while heavy chants from what sounds like a mass of people (whether audience-provided or pre-recorded) provide a rhythm-focused choral aspect.

After revving things up with a couple of full songs (including the meaty “When Demons Collide”) vocalist Patrik Johansson calls upon the audience to give the night their full energy as he informs them that they’ve been chosen to serve as participants in the recorded DVD of the event. Gauntlet thrown to the crowd, the band rides on their momentum into the genre-honoring “In the Name of Metal”, keeping spirits high.

A couple of additional odes to metal (like “Metalheads Unite”) are tucked in through the rest of the concert, giving things a bit of Manowar flavor when they crop up, but the band covers a fairly wide spread of the power metal purview across the fourteen-track set-list. Also striking is how gracious they are to their audience, working hard to keep them engaged and regularly throwing out a “Thank you!” at the end of songs.

While the production is pretty good by live album standards, there is some slight gumminess to it when things get particularly energetic. Although this gives an impression of the band rearing up together as one magic-fused monster (if you wanna imagine it that way), it’s also kind of disappointing the way some of the instruments get lost in the din. Also, for some reason, the solo guitar has a tendency to be drastically under-mixed, making for sadly anticlimactic moments when the rest of the band cuts quiet to spotlight its playing, as only a distant tinny shredding can be heard. Judging by the crowd’s still-positive reactions, this was a problem that only emerged in the post-production.

One Night of Blood is a pretty respectable live album, finding the band in good form and earning kudos by caring for the enjoyment and engagement of the concert’s attendees. As with most live albums, the release is likely more special for big fans of the band, but (speaking from personal experience here) it’s a good show even if you haven’t previously heard any of Bloodbound‘s material.

IN A NUTSHELL
Fans of power metal who dig the energy found in a well-played live show should give this one a go
POSITIVES
The band puts forth the confidence and energy of a group that's been together long enough to be well comfortable playing together, there's interactions with the audience, and the recording of the live event is nice and professional in quality (for the most part).
NEGATIVES
The songs can get somewhat repetitive, so if you hit the 40-minute mark and you're feeling a little weary, you've still got half an hour of similar stuff to go.
3.5