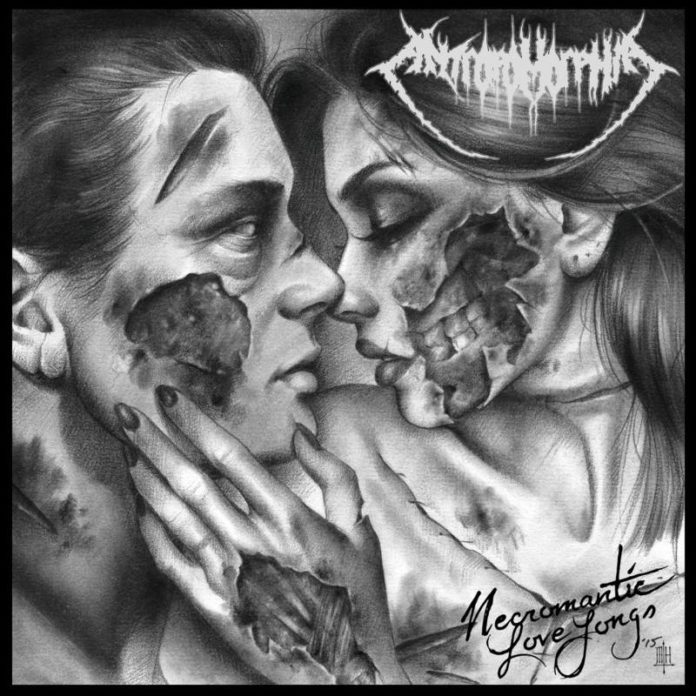 Dutch death metal outfit AntropomorphiA have been busy since officially reforming in 2009. In 2012, they released their critically-acclaimed debut for Metal Blade, Evangelivm Nekromantia, an album so good it was banned in Germany for violent/occult themes. Moving forward, AntropomorphiA followed up with 2014’s Rites ov Perversion, again to much praise from the metal community. This year they have decided to give their fans a glimpse of the past, in the form of Necromantic Love Songs.

Consisting of their 1992 Bowel Mutilation demo and the 1993 Necromantic Love Songs EP, Necromantic Love Songs has been remastered and released just in time for Valentine’s Day Weekend. After all, what says “I love you” better than a little bowel mutilation, right? These gory masterpieces have been languishing for over 20 years, and the original releases have been highly sought after by longtime fans. For many, this might be the first time these songs have been heard, I can tell you that, despite their age, these tracks stand up to just about anything else being released in the death metal community today.

Track after crushing track pummels the listener, with deep death growls, speedy guitars, deep bass, and reverb-laden snare. The production does a great job of emphasizing the heaviness of the riffs, particularly when things slow down, such as the opening riff in “The Carnal Pit.” While the music isn’t super technical, there are still enough changes in pace packed into each song to keep things from getting monotonous. “Rotted Flesh,” for instance, has a somewhat mid-paced opening riff, which gives way to some of the fastest guitar playing on the record, and then slows down to a doomy pace, similar to Incantation.

AntropomorphiA have really unearthed some diamonds in the rough with this release. It’s difficult to imagine this band not dominating the death metal world with this caliber of songwriting. Due to various circumstances, they had to call it quits back in ’99, and these tunes very well could have been lost to time. Thankfully, that’s not the case, and they sound just as vibrant and vital today as I imagine they sounded upon their initial release. Again, the reverb coating every sonic texture of this album definitely places these tracks firmly in the 90’s, but the crushing heaviness can’t be denied. If you’re a fan of death metal at all, especially along the lines of Centinex, Bolt Thrower, and Vomitory, do yourself a favor and pick up this little slab of metal history.

IN A NUTSHELL
How these guys didn't conquer the world with these killer tunes back in the early 90's is beyond me.
Reader Rating0 Votes
POSITIVES
Solid remastering
Plenty of changes in pace keep things interesting
Still heavy as hell
NEGATIVES
Modern death metal fans might want something a little more technical
Lots of reverb
4.5