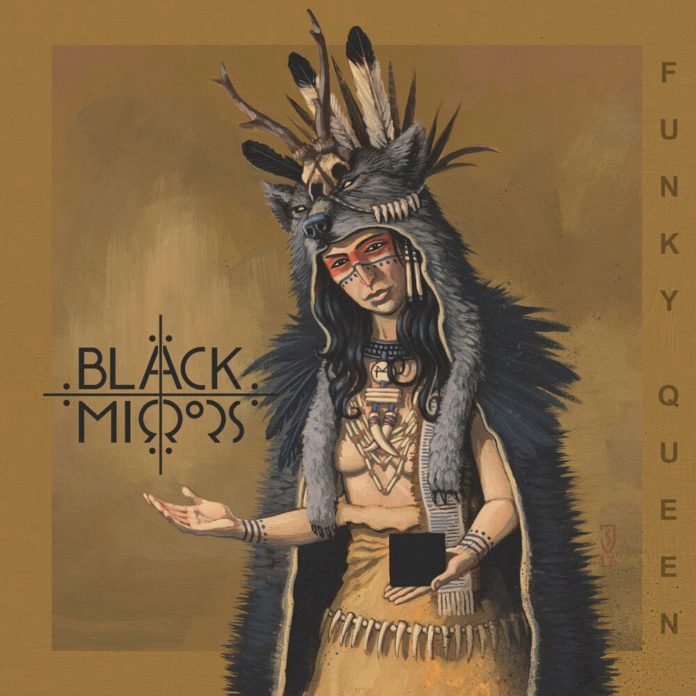 Following up on their self-titled and self-released EP from 2014, Black Mirrors are back with another one, holding over their song “The Mess” from the first one, giving it the polishing it deserves for a major label release under Napalm Records.

Funky Queen opens with its title track, a piece which blends elements from a wide stripe of rock interpretations into something which provides a superficial impression of rebellion, without anything to indicate that it’s more than a sales aspect. That being said, the grooves are fairly tight, with an interesting cooing sound from filtering either the vocals or the guitar, showing that they can really manage the the radio rock structure.

The new version of “The Mess” is probably the best part of the EP (definitely above their just-satisfactory cover of MC5’s “Kick Out the Jam”). Here they slow down enough to give their punchy riffs some genuine weight, showing some light traces of blues and country that point to them having some taste for the roots of the genre they’re harvesting. Even the “whoa-oh-whoa-oh-whoa-oh”s and “ohh-ohh-ohh-ohh-ohh”s work, thanks to some guitar underscoring. While it’s not one to sing along with, the melody has some strong hooks.

All and all, this EP shows the potential of Black Mirrors. Sadly, it also shows a certain lack of consistency, since songs like “The Mess” show them as true rock devotees, while others, like “Canard Vengeur Masqué”, seem to paint a picture merely a bar band. It would be great to see the band drop some of the clichés they’re leaning on, push themselves to do a real blistering song they could use for finishing live sets, and see how they grow from there. As of now, it’s just too derivative to give them any sort of unqualified praise.

IN A NUTSHELL
Too focused on rehashing rock of the past to go far in their current state, but it shows enough promise to make it worth checking in on their future releases
Reader Rating0 Votes
POSITIVES
Good grasp of instrument dynamics
Some fun studio touch-ups
A nice song choice for their cover track
NEGATIVES
Feels like they're a little too unsure of themselves at this point to step away from reworking pieces from their favorite songs into their own
3.5