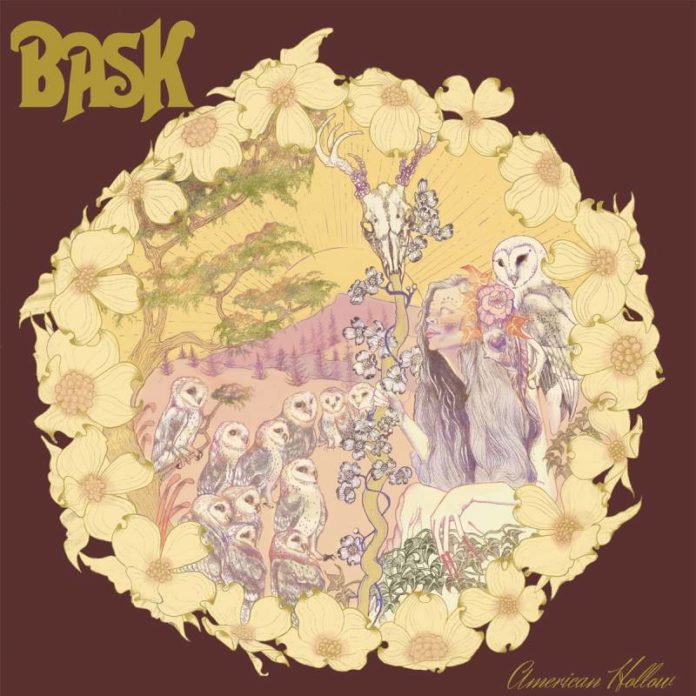 The last several years have been pretty exciting in metal with all the experimentation and cross-pollination of genres; many metal bands have looked outside the confines of their particular niche to incorporate such genres as shoegaze, post-rock, Americana, country, and ambient music. Post-metal, blackgaze, drone doom, and sludge have all come as a result of bands thinking outside the box; true, some of those sub-genres might not be super new, but the number of bands in each one have grown exponentially, and have continued to push boundaries. For instance, modern doom is almost unrecognizable compared to the early bands like Candlemass, Witchfinder General, and Pentagram, with as many sub-genres as there are “parent” genres (i.e. black, death, thrash, power).

Bask are a young band from North Carolina that play a highly original blend of Americana, country, post-rock and stoner/doom metal. American Hollow is the band’s debut on The Path Less Traveled Records and, without a doubt, I can say it is one of the most unique records I’ve come across in years. “High Mountain Pass” is an energetic album opener, starting with a half-time shuffle that breaks into a pretty straight-forward stoner rock groove, similar to some of the less aggressive tunes by Red Fang. The vocals have a pretty noticeable twang to them, giving the music a distinctly country vibe, though with a bit more power and volume than anything you’ll hear on a modern country record. The vocals are a strong point, to be sure, but the music they’re soaring over is just as powerful; jangly guitars, low rumbly bass, and big drums that are pretty reminiscent of the tone John Bonham laid down in classic Led Zeppelin, though with a little more dynamics. The first track might be a little misleading though, as the rest of the album has an almost dreamlike feel to them, particularly on the slower songs like ”American Hollow” and “A Man’s Worth,” both of which have a melancholy country-like feel to them. “American Hollow” in particular has a post-rock, indie rock vibe mixed in, almost like Band Of Horses, except Bask go into a bit heavier territory, whereas Band Of Horses obviously have a more radio-friendly vibe.

Though there are only six tracks on American Hollow, the music really takes you on a journey, evoking visions of the countryside. Bask do let loose with some heavy moments too; “Shake The Soot From Your Boots” has a pretty Black Sabbath-worthy riff that shows up a couple of times throughout the song, before really cranking the volume in the last minute. “Land Of The Sky” is the closest Bask comes to a straight-forward doom track; under the layers of shimmering guitars, the bass rumbles menacingly, and the more rhythm-oriented guitar lays on some thick over-drive for good measure. The production really suits the music; layering is handled with perfection, and the drums and bass are turned up just enough to give the tunes a little punch to them, reminding the listener this IS supposed to be a metal album after all.

The only issue here is that American Hollow might be just a little too “pretty” sounding for a lot of the metal crowd; there are some heavy moments, for sure, but the pace doesn’t quite pick up like it did in the album opener. There really aren’t any other bands playing the blend of sounds that Bask are, and I applaud them for bringing something new to the table, but I would have liked to have heard a few more heavy moments.

It’s rare that I get an album as different as American Hollow, and overall I truly enjoyed it. The musicianship, production, and tone are top-notch, and the finished product sets Bask apart from their contemporaries. This record is a must-listen, I promise it doesn’t sound like anything else you’ve heard; if you’re looking for something to break the status-quo, Bask are for you. There aren’t a whole lot of heavy moments, which might turn a few people off, but if keep an open mind, ultimately, you’ll be rewarded.

Highly original band with a take on stoner metal that's a little off the beaten path
Unique blend of country, doom, and post-rock, strong vocal performance, excellent production
Might not be heavy enough for those looking for the full-on doom treatment
4.5