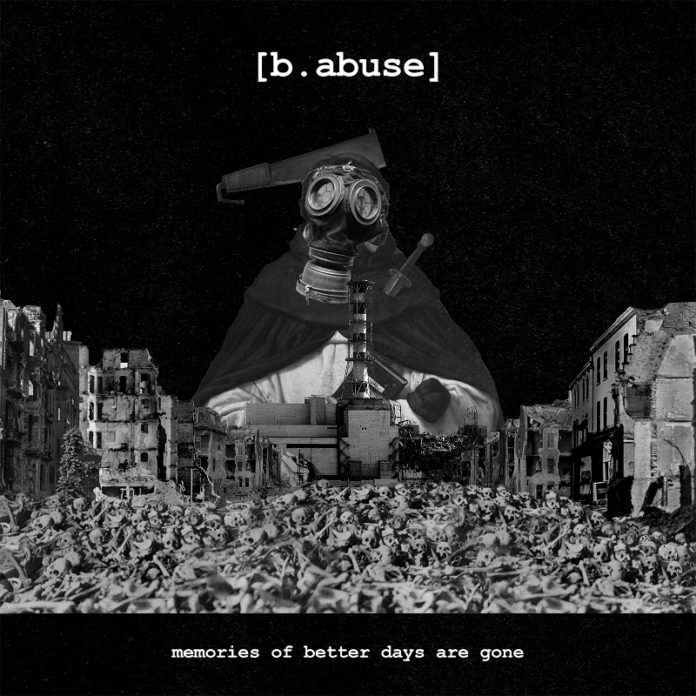 There’s something about albums that run eight tracks long. Even though the 8-track format is virtually dead (aside from the labels that intentionally release on obscure formats, like Auris Apothecary), an LP with that magic number of songs automatically gets me in mind of a more ’70s-styled approach to album-structuring and amp tones. Those expectations don’t so much get derailed as mutated by B.abuse‘s reality, which meshes punkish roughness with metallic instrumentation that seems uninterested in adhering to the precepts of any given sub-genre, although they don’t keep that mix up for more than one track before drastically switching gears. For example, the second song, “Alte Haeuser Ohne Namen” takes a hard swing into post-punkish spoken-word over ritualistic tone cycles, and the song after that (“Reward Prediction Error”), cock-rockish guitar riffs punched into G.G. Allin-ish vocals, atonal saxophones, and an almost industrial drum-beat, though it’s clearly organic.

So pigeon-holing them is something not just unfeasible, but pretty thoroughly defied by the band. And in these days of Electric Wizard clones, indeterminate heavy rock masses, and enough similar death metal acts that you could fool someone into believing a full mix CD was one band’s work, B.abuse‘s success at following the impulse to really do something distinctively different is a considerable relief. Of course, with that much experimentation firing in so many directions, it’s not a flawless work, but it’s just as obviously something which rejects musical ‘perfection’ as inherently boring. Instead of the sterility of overwrought guitar solos and steady-state singing from start to finish, B.abuse have put together eight experiments which offer them innumerable options for growth on follow-up efforts. Though it may not be in the mold of releases from decades past, it does call back to times when there was a lot more room to grow without resorting to electronic processing. Let’s hear it for broken expectations.

THE BOTTOM LINE
An array of styles which won't work for everyone, but which undoubtedly had the band moving past their comfort zones to create
Reader Rating7 Votes
POSITIVES
Feels fresh and creative
Mixes things together in uncommon ways
Brings some fiery energy into play more than a few times
Finds room for more subtle mood-building as well
NEGATIVES
Won't sit well with people in the mood for something with a steady tone from start to finish
Feels a little too self-indulgent at times
4.5