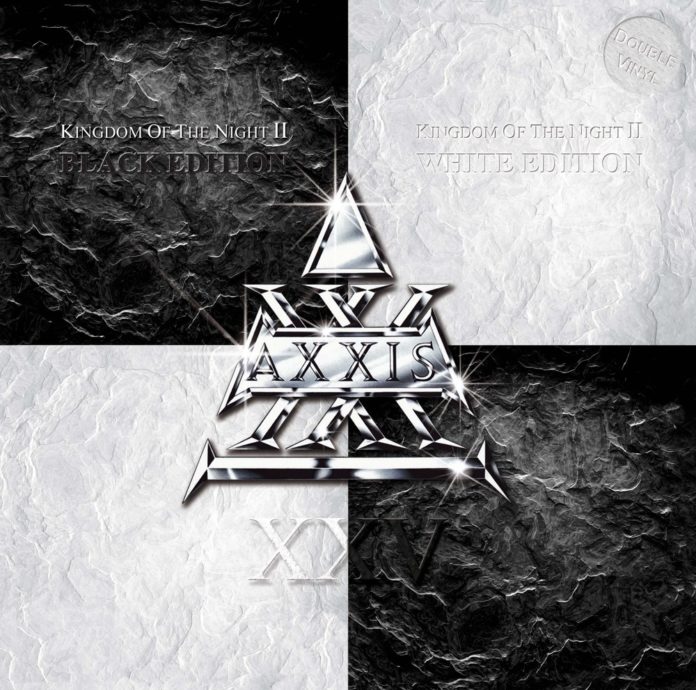 It often happens that when I review an album, even if I enjoy it, it leaves my playlist as soon as the review is done. While this could just be the result of me getting older and having a hard time enjoying new things (get off my fucking lawn!) it probably is that it is hard for me to really feel drawn in by an album. Having reviewed their rather forgettable reDISCOver(ed) a couple of years ago, I would have never thought that Axxis’ new release, Kingdom of the Night II, would be enjoyable enough for me to keep it on repeat for weeks on end; but that’s exactly what happened.

With Kingdom of the Night II, Axxis celebrate the 25th anniversary of their critically acclaimed Kingdom of the Night, by giving fans two full records, a “white” and a “black” edition, focusing on softer and harder music respectively. While some might see these two releases as separate albums, I look at them as one record, as they maintain a clear consistency in sound and style, save for the small addition of extra “heaviness” in the black edition.

By separating the album in two, Axxis have been able to make a distinction between the two stages of their history as a band. While the white version seems focused on the Hard Rock days of the band, the black edition pays homage to the Power Metal sound that they adopted in the last decade or so; true, Axxis didn’t exactly change completely, and you will be hard pressed to find extremely heavy sounds in the black edition (Bernhard Weiss’ “helium voice” wasn’t really made for growling) but the change is there. You won’t exactly question whether it’s the same band or not (as it might have happened to those who listened to “They Rode On” from Watain’s latest record) but it will be interesting enough to make you pay attention.

Both sides of this release have great gems to offer, with songs like “Mary Married a Monster”, “Kingdom of the Night Part II” (a great homage to the original, although far from a cover), “21 Crosses” and “Hall of Fame” serving as clear tributes to Axxis’ quality as musicians and songwriters. Although the album might be a bit too bloated (some songs could have been stripped altogether) the band left very little to chance, making sure that the production was top-notch and apt to convey the effort that was put into this record.

Axxis are one of those bands that, for whatever reason, never really got a chance to make it as a big as they should. Kingdom of the Night II may not be a game-changer for the band, which might be relegated to being one of those “best bands you’ve never heard of”, but it sure as hell is a terrific release.