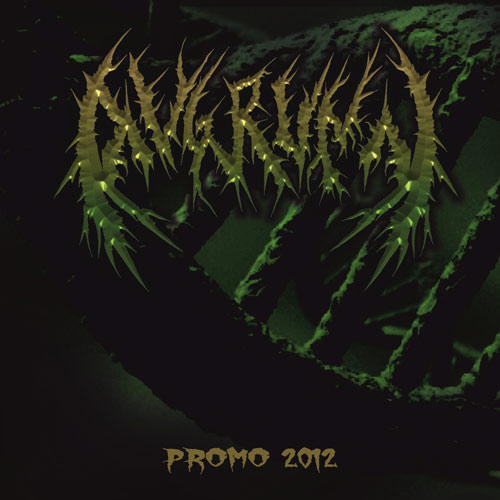 It seems that Disgorge‘s reach is far and wide, as Avgrunn absolutely reeks of Disgorge-worship.  These Barcelona-born death metal maniacs have a pretty standard formula for brutal death metal and it seems to hinge heavily not only on the aforementioned band, but specifically California-styled brutal death metal.  The riffs are fast and chunky at the same time, plenty of blast beats and double bass, and vocals that are very reminiscent of Levi Fuselier’s (Disgorge, ex-Pathology, ex-Being Killed) guttural growling.  The only thing that doesn’t seem to be directly ripped from Disgorge is that the drumming, while tight and well executed, is not as adventurous as one would like to hear in brutal death metal like this, except maybe in the last minute or so in “Pyrophilia.”

This three-track promo-demo doesn’t exactly have a lot of variation to offer, but Avgrunn makes up for it in creating very similar catchy riffs as if they were done by Diego Sanchez (Disgorge) or Ed Talorda (Disgorge) themselves.  There is also a certain charm to the other two tracks, “Conceived Genetically Perverse” and “Fatal Fetus Metamorphosis” that lies within the production, and I also really dig the guitar tone.  Avgrunn, despite seeming to have some line-up changes in the two years they have been on this planet, seem to be getting started on finding their individual sound, and the way I see it is if it keeps hinging on this California-style of brutal death metal, then I will keep my eyes peeled for them in the future.