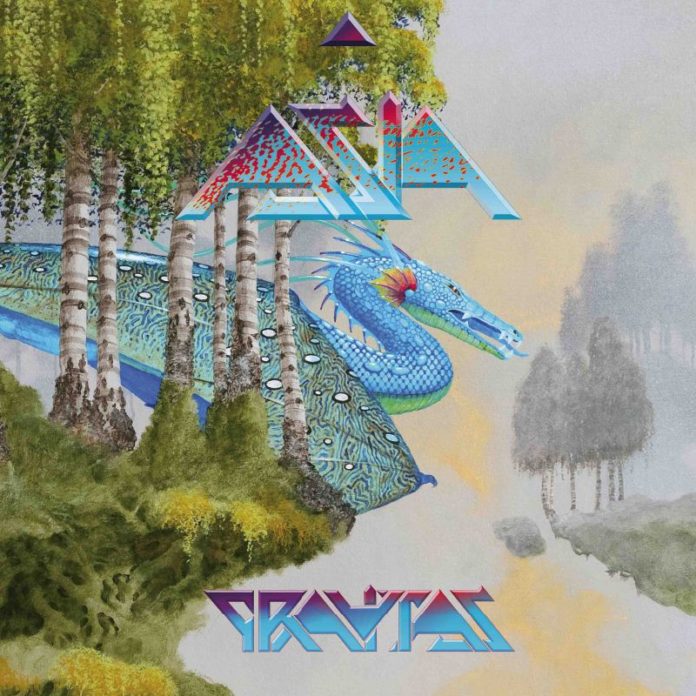 DISCLAIMER: I hope you can understand the amount of restraint I had to employ so as not to make “Heat of the Moment” jokes during this review.

ASIA are back with a brand new album that seems to fit right in with their previous work; what I mean by this, however,  is that it’s your run-of-the-mill ASIA album. While, on the one hand, hearing a little bit of that fun, classic ASIA sound could be enjoyable to a listener, on the other hand, ASIA have been making music since 1982, so hearing more or less the same sound 30 years down the road is a little discouraging. It’s almost baffling how there could be so little stylistic evolution over the course of 30-odd years, and yet, ASIA somehow pull it off.

Gravitas actually starts off somewhat promising with the opening track “Valkyrie”. It’s a smooth and somewhat hypnotic song that makes the listener feel like this album might have a lot to offer. It has some pleasing vocals from singer John Whetton, and some rockin’ drums, synthesizer, and guitar riffs from their new guitarist, Sam Coulson. But as much as I would love to speak highly of this track, I just cannot get past the outright horrible music video that accompanies it. I don’t just mean that the music video is silly, I mean that it’s total crap. The quality looks like something filmed from a cellphone by a struggling film student, and the clips look as if they’ve been spliced together with the free movie-maker software that comes standard on most computers, complete with cliché cloud transitions, beach sunsets, and shots in black and white, as well as sepia, for some reason. To top it off, our dear Mr. Whetton offers absolutely nothing in the way of visual displays of emotion or passion, especially for a song that actually has a decent amount of feeling to the vocals. Come on, man, just give us an emotional grimace or something. Anything but the bland look of a bored father standing on the beach, thinking about how much he hates his kids. (Seriously, though, I recommend you watch this music video before investing any time or money into this album)

As much as I hate to say it, Gravitas goes mostly downhill from there.  The song that follows “Valkyrie” is the title track “Gravitas”, a  a slow building track that takes about 2:20 to actually get to the meat of the song; while this might work for some people, it honestly didn’t work for me. By the time it actually got to the opening guitar riff, I was bored and uninterested, even if the guitar that greeted me wasn’t that bad. The title track is followed by “The Closer I Get”, the first of numerous ballads on this album,and which, much like the track before it, bored me. Some ballads, when you listen to them, immediately draw you in; they are powerful and emotional and alive. This is not one of those. The lyrics are fairly emotional, but they simply write a passionate check that music and vocals just can’t cash.

Now, things do improve a bit with “Nyctophobia”. This one is actually fairly catchy and interesting to listen to; it isn’t a spectacular feat of musical skill, but if I had to pick a song to listen to, I would definitely pick this one. This track is probably going to be that one song on the album that gets stuck in your head whether you like it or not, which in this case isn’t necessarily a bad thing.,. Sadly, this song by “Russian Dolls”, another ballad which, although starts in a promising way, quickly loses its appeal, transitioning from a lovely introductory melody to a disjointed and unpleasant break down, and then back into the same opening melody. It’s an emotional rollercoaster in all the wrong ways, mostly because it gets your hopesand then leaves you wondering why you even bothered to listen to it

There’s definitely a tie between “I Would Die for You” and “Joe DiMaggio’s Glove” for the worst track. These two could battle for the Most Cliché Lyrics trophy. “I Would Die for You” consists mostly of that one line “I would die for you”, with the occasional “where do we go from here?” sprinkled into it; while “Joe DiMaggio’s Glove” features gems such as “You were a gift from above”, and “I’ve never been so  in love”, intermixed with an extremely random reference to an old New York Yankees baseball star. If you’ll forgive the pun, the reference to Joe DiMaggio really does feel like it came completely out of left field. I honestly can’t decide which song I disliked more, because they’re both just terrible in their own unique ways.

The album wraps up with “Till We Meet Again”, which at this point feels like a threat. Overall, this album is bland, unimpressive, and trite, and after having to trudge through the entirety of Gravitas, I’m not sure I really want to see ASIA again for at least another 5 years. And at that point, I would also really be hoping to (but not counting on) seeing some musical growth and evolution.

“Till we meet again, think the best of me”