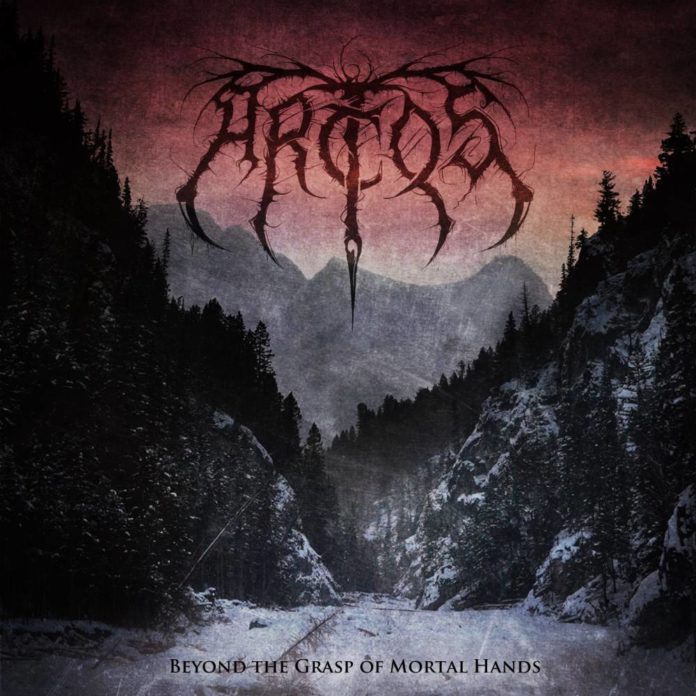 Discovering melodic/symphonic black metal was quite a revelation for me, especially considering that the bands that got me into black metal in the first place had that buzzy, “necro” style of production so prevalent in the early Norwegian scene. There still persists a mindset within some circles of the black metal fandom that if an album doesn’t sound like the recordings were done on tape, and that tape was buried in the front yard for a week before being mastered, it isn’t black metal. Thankfully I didn’t get caught up in that mindset, otherwise I never would have discovered bands like Dissection or listened to any of the full-length releases of Emperor. I certainly wouldn’t have considered listening to Canada’s Arctos and, in turn, would have missed out on their majestic debut LP, Beyond The Grasp of Mortal Hands.

Arctos play a melancholy, often beautiful form of melodic black metal reminiscent of Dissection, with elements of symphonic black metal mixed in. Despite being a band since 2014, Beyond The Grasp of Mortal Hands is Arctos’ first full-length, and, as debuts go, this one is quite impressive. There are a lot of different approaches to melodic and symphonic black metal, and almost all of them are explored at one point or another during the course of this record. “A Realm Beyond,” for instance, uses more keyboards and symphonic tones than you’ll hear on the rest of the record, taking on a sonic-quality similar to Cradle of Filth, though the vocals are a little more mid-range death growled. The melodies evoke a sense of sorrow and melancholy, which in addition to Dissection, also reminds me of Vittra-era Naglfar.

The use of clean/acoustic guitars on tracks like “Somnos Aeternus” and “The Light Beyond the Sky” up the ante on the melodic aspects of Arctos’ sound, at times almost pushing the tone into shoegaze territory. As melody-driven as the riffs all are, there are some truly brutal moments, such as the verse riff on “Shattered Tomb,” which reminds me of the heavier licks from Old Man’s Child and Dimmu Borgir. While I can tell who Arctos’ influences are, the band doesn’t come across as regurgitating old ideas, or just copy-and-pasting riffs from their favorite records. Though Arctos aren’t exactly breaking new ground with this release, there’s a sense of sincerity in their sound, and you get the feeling that their influences are simply the foundation for the sound they’re trying to build.

If you’re a fan of melodic or symphonic black metal, Beyond The Grasp of Mortal Hands is well worth your time. Arctos transition flawlessly from passage to passage in each song, creating a mesmerizing black metal record that you’ll want to listen to from start to finish. The production is excellent, with a great mix of low and mid-range, giving the melodies a heavy edge. Recommended for fans of Dissection, Naglfar, and Old Man’s Child who are looking for something a little more melancholy without forsaking that epic sound you expect in a melodic black metal record.

Arctos - Beyond The Grasp of Mortal Hands
Impressive debut from Canadian melodic black metal outfit Arctos
Reader Rating1 Vote
Flawless transitions between passages in each song
Excellent production, which emphasizes the melodic AND heavy aspects of the overall sound
Beautiful, sometimes haunting melodies that will linger long after you've stopped listening
If you like the old "necro" style of production, this will probably be too sleek for your tastes
Not terribly groundbreaking
5