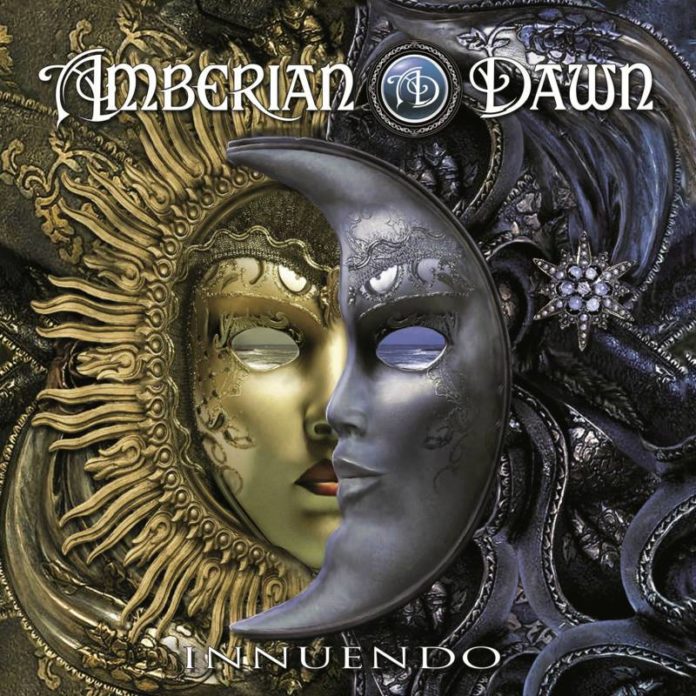 If you prefer your metal to be in the symphonic or power metal vein, chances are you have heard, or are a fan, of Amberian Dawn. Founded in 2006, they combine melodic speed/power metal with symphonic keyboards, neoclassical elements, and tales of fantasy and Finnish/Norse mythology.

Innuendo finds the band pressing forward with a set of memorable songs, as well as their trademark melodic metal sound and fantasy-themed lyrics fully intact, which will please long time fans. One element of Amberian Dawn’s sound that has always set them apart in my eyes is their emphasis on a heavy (but melodic) guitar-driven sound, which isn’t always the case in the symphonic metal world. “Rise Of Evil”, for example, has some fast riffs and blazing guitar solos that highlight guitarist Tuomas Seppälä’s considerable skill as the band’s primary songwriter, as well as the band’s love for classic heavy metal along the lines of Dio and Judas Priest.eavy-worship aside, there are plenty of keyboards and layered choral-style vocals, and midway through the album we are treated to a haunting piece called “Angelique” which consists solely of Capri Virkkunen’s angelic vocals and some accompanying keyboards. Capri has an impressive vocal range, thanks in part to her classical vocal training, but she also has a harder rock and roll edge, as you can hear on opening track “Fame & Gloria.” Lyrically, although Innuendo continues with Amberian Dawn’s traditional fantasy/mythology themes, in the case of “Fame & Gloria” they aren’t afraid to to turn some of the genre’s conventions on its head. This is a song focused on a band of marauding female pirates, which is actually a bit refreshing in the often male-centric worldview bands in this genre have.

The production on Innuendo is excellent, and strikes a good balance between the symphonic/neoclassical elements of Amberian Dawn’s sound with their heavy metal side. The layered vocals on the choruses add an extra element to the songs that give them an epic, grandiose feel, and compliments the keyboards. Still, I found myself skipping a couple of tracks; “Ladyhawk,” despite the personal and heartfelt lyrics, sounded a bit like a slightly heavier Journey, and the same can be said for “Knock Knock Who’s There.” Now, that’s not necessarily a bad thing, but I’m more drawn towards the more traditional sounding speed metal numbers.

Small issues aside, Innuendo is an enjoyable record, and a solid effort from Amberian Dawn. If you like fast, melodic power metal along the lines of Stratovarius or Sonata Arctica with plenty of symphonic elements, give this one a spin.

IN A NUTSHELL
Great symphonic metal effort from a seasoned band
POSITIVES
Capri's vocals and lyrics are fantastic, fast, technical guitar work, solid production.
NEGATIVES
Not all of the songs held my attention
4