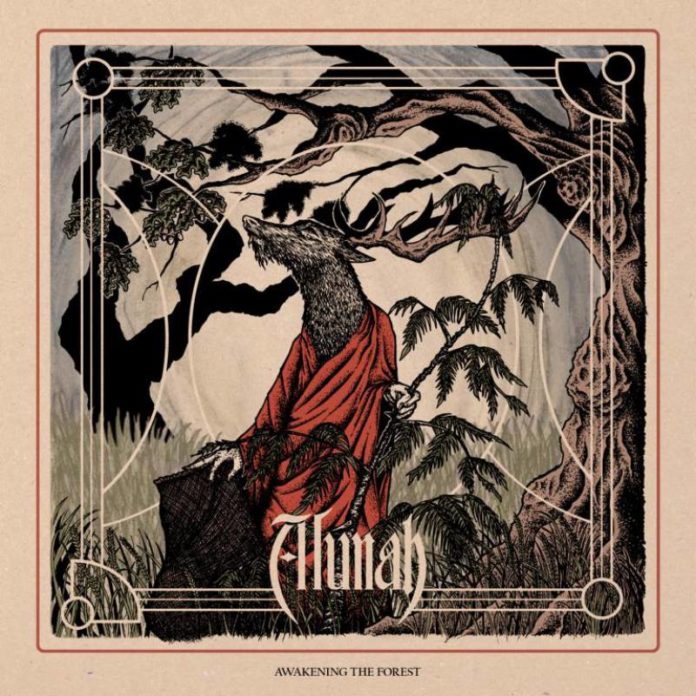 It’s shocking that doom female singers have only recently become popular; after all, if you listen to the timbre of Ozzy Osbourne‘s voice over those early Iommi riffs, it seems to parallel the soft tones of female opera singers and the way they contrast with bottom-heavy classical arrangements. But female-fronted doom is where we’ve finally arrived and it’s a trend that is definitely welcomed. When it creates ethereal, backwoods ritual shit like the music enclosed here, how can it NOT be received enthusiastically by the metal masses?

As a bit of a doom novice, Awakening the Forest was my first foray in to the world of Birmingham’s Alunah, and I was, on the whole, pleased with what I found. While it’s far from the most creative or inventive thing I’ve come across in the genre, it’s certainly not the derivative, boring mess that some doom acts can be. The band is great at creating a certain vibe and not relying on the usual tropes of their genre to get there. For example, I don’t feel like singer Sophie Day is trying to summon demons when she sings, but rather like she’s communing with nature. While it’s an angle that I’ve heard before, it’s also one that is underused compared the usual occult and/or cannabis-related leanings of many of the genres better known practitioners.

As to the band, the most important part of being an effective doom ensemble is to keep the songs moving forward. With the slow burn so essential to the genre, some acts find themselves floundering and flopping around within their own songs. I’ve always found that to be both self-indulgent and INCREDIBLY boring to listen to (maybe I just don’t get it). David Day (guitars) doesn’t let this happen; he’s always pushing the song forward, creating compelling riff after compelling riff, never making the listener wait for the band to catch up. The whole band, in fact, is very good at keeping the listener engaged and maintaining the overall structure of each song.

This is the key of what Alunah have created on their third full-length record: well-structured and engaging songs. They don’t clutter up the album with overt worship and imitation of Black Sabbath or Saint Vitus, nor do they meander about with long, droning passages of nothing but feedback. They keep the listener engaged and entertained with compositions that feel like they live and breath. This is what the best music does, regardless of the genre it falls into. Awakening the Forest is immersive, entertaining, and definitely up there with the best metal I’ve heard this year.

While it won't shake the earth, the latest doom record from metal's birthplace is a well-crafted, thoroughly enjoyable walk through the woods.
Immersive and entertaining material
Cool vibe and theme
Doesn't overtly imitate anyone.
Doesn't reinvent the wheel
Though solid and VERY enjoyable, it's probably not the best doom you'll hear this year.
4