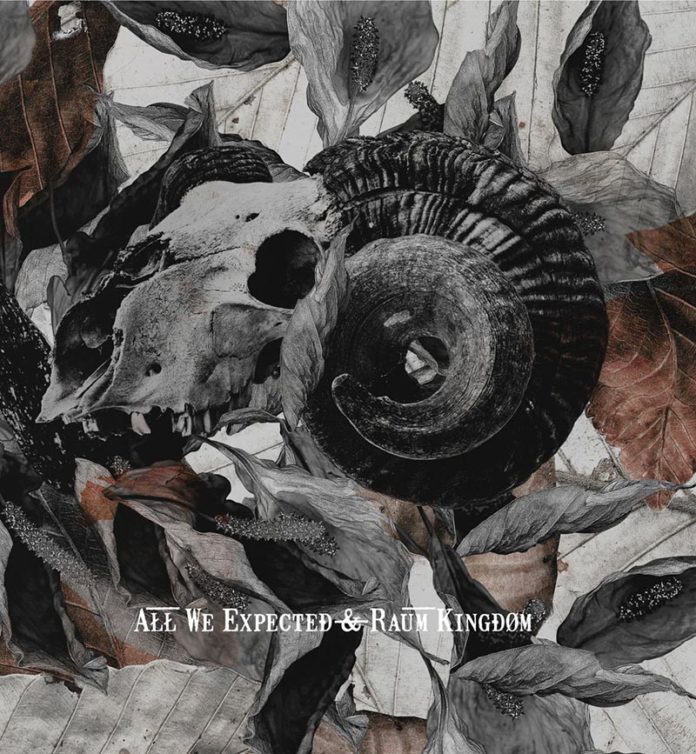 All We Expected and Raum Kingdom share a penchant for all things slow and heavy, but their music captures two distinctly opposing qualities. All We Expected capture elegance, conflict, and hope; Raum Kingdom, on the other hand, are less optimistic, evoking fear, disorder, and chaos. While these two opposing forces join to make a cohesive whole, where do their strengths lie?

All We Expected side evokes the graceful melancholia of the genre. Rather than using their instruments to double up on riffs to construct thick, layered walls of sound, the guitarist duo of Maertens and Tytgat interweave delicate, icy echoes and immovable, domineering clout to achieve cavernous, cinematic textures. The guitar melodies are particularly reminiscent of the recent wave of blackgaze artists, notably Sun Devoured Earth and early Deafheaven, but with enough force behind it to level entire cities. One of the most enjoyable aspects of All We Expected side is Artuur Bruwier’s drum work. He really knows how to add suspense through detail and deadly precision in a genre where the majority of the percussionists treat their art as more of an afterthought.

Raum Kingdom’s side acts as the grim aftermath to All We Expected’s gallant heroics. More brooding, more sinister, and with more riffs. Taking cues from the Eyehategod school of metal rather than Isis, Raum Kingdom take advantage of their long instrumental passages to create haunting, fearful atmospheres that lurch and crawl, ungraceful and grotesque in all the right ways. The band also opt for the vocal talents of Dave Lee rather than sticking to instrumentals like their Belgian counterparts. Lee’s vocals contribute a huge amount to the eerie atmosphere of the record, trading off between fearful hymnals and throaty, hardcore bawls. His vocal talents aren’t the most technically-proficient, but manage to aptly capture the visceral mood that the record shoots for.