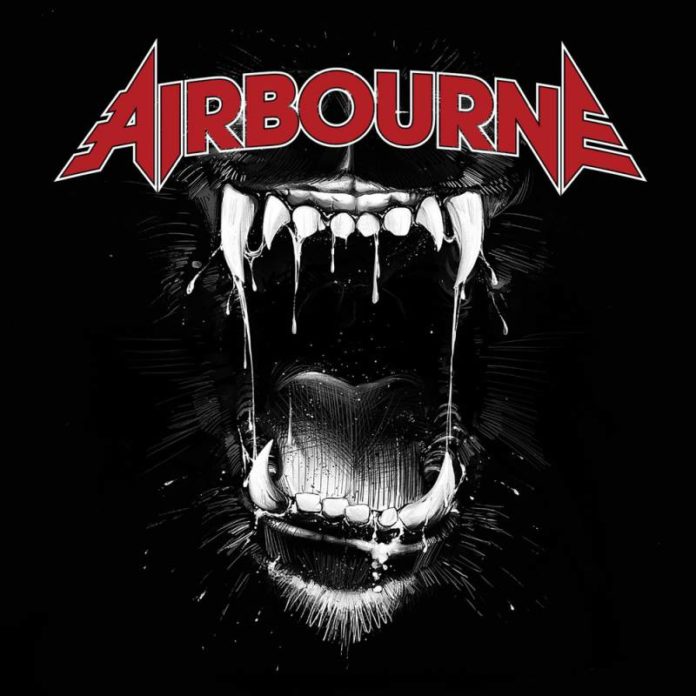 All the comparisons are true. Airbourne has, from the very beginning, sounded like the exact middle-ground between AC/DC, Rose Tattoo and Motörhead. Their musical ideas are not what one could call wholly “original”.

Then again, I don’t give a rat’s ass, and neither should you.

Even if that is the space that the Aussie road dogs choose to occupy, I don’t hear a single shred of derivation or “copycat” when I listen to their music. That’s because, while it shares aesthetic traits with those bands, you can tell that that is just the way these guys are. They just love their rock ‘n roll and want to share that, in its purest form, with the world. They have fun with music, and write songs that they enjoy both playing and listening to. You can hear the passion in every song they’ve produced so far, and Black Dog Barking, their third full-length, is no different.

The album kicks off with “Ready to Rock”, which is a re-work of the title track to their first EP. It’s really cool to see the guys being willing to go back and work with some rarities from their back catalogue, especially when it’s as rollicking and entertaining as this opener. Though I can’t say I like it quite as much as “Born to Kill” (the opener on 2010’s No Guts. No Glory) it’s still a fully-charged thrill-ride to set the mood for the record.

While the album’s first half is a ton of fun, the band really smokes come track six. There is no doubt in my mind that the ballsy bad boy battle cry “Live it Up” was the absolute best choice that the band could have made for the first single. The slow building intro just amps the intensity to a point that allows the band to charge full-force through the gates and pillage the listener’s ear drums. This song is surely within the bands best dozen-or-so tracks, along with the booze-fueled, black-toothed “Cradle to the Grave”, which has one of those slow-burn, infectious choruses that will hook anyone with a pulse. Even the title track, which closes out the record, is a perfectly placed, cohesive, stomping affair: Straight-ahead and dumb-simple, leaving the listener with the overall message that this is Airbourne.

This album sounds amazing, looks amazing, and even the tracks that I wasn’t initially wowed by will undoubtedly seep into my brain like a disease. These guys owned my summer when No Guts… came out in 2010. It looks like they’re about to own summer 2013 too. Hail Airbourne! The worthy heirs to the throne that Angus built! Long may they reign!