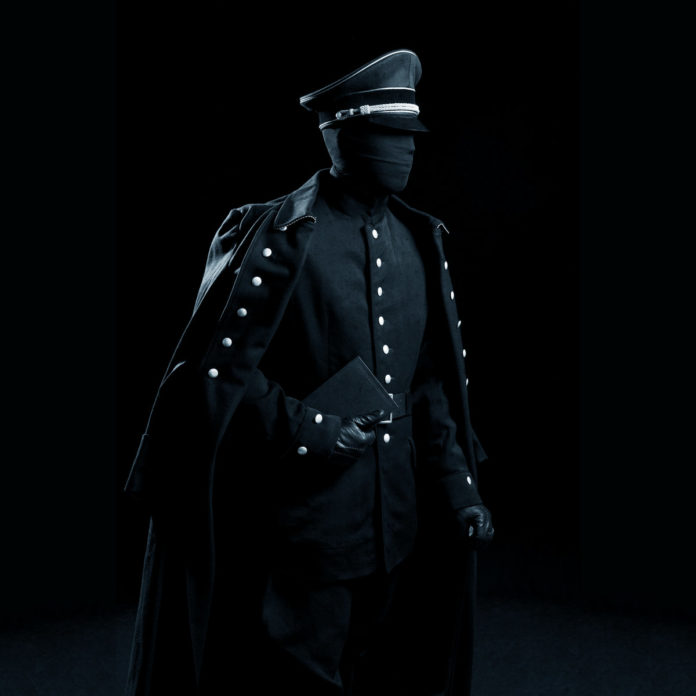 Black metal bands have been incorporating industrial into their sound since the 1990s, starting with bands like Mysticum, DHG, and Samael. The two genres have a lot of common ground, actually; both genres are known for their abrasive and purposefully anti-commercial sound, dark lyrical content, and a strong visual aesthetic. The two genres seem almost tailor-made for each other, though it’s doubtful the pioneers in either genre ever anticipated the crossover; still, there have been some pretty interesting acts that have mixed the two sounds over the years.

One such band is France’s N.K.V.D., who have produced one of the most terrifying records this year, Hakmarjja. The sound on Hakmarjja is cold, mechanical, and abrasive, with layers of electronics washing over chaotic, heavily overdriven guitars, militant-sounding electronic drums, and droning vocals that alternate between chants and growls. The third track, “Wolfschanze,” is absolutely nightmarish, with reverb-drenched audio clips, heavy guitars, washes of electronic noise, and demonic vocals. N.K.V.D. are not a band that are for the faint of heart; the visual side of the band is extremely militaristic, which reflects their lyrical obsession with totalitarian governments, particularly the Soviet Union. Even the name N.K.V.D. is the name for the law-enforcement agency that predates the KGB in the Soviet Union during the Stalin-era; there are numerous sound clips that sound like Soviet-era songs, which adds to the tone of the record.

The production is pretty decent, though the electronics can be a little overbearing at times; on the title track, “Hakmarjja,” the washes of feedback really bury the guitars in bass in the mix, and just come across as a little too muddy. Sometimes the sound comes off as a bit too distorted due to the layers upon layers of sound, but more often than not, this works in N.K.V.D.’s favor, and makes for a pretty unsettling listening experience. The words “grim” and “cold” have been thrown around a lot over the years when describing black metal, but Hakmarjja is an album that can truly be described as both of those things. Listen at your own risk.