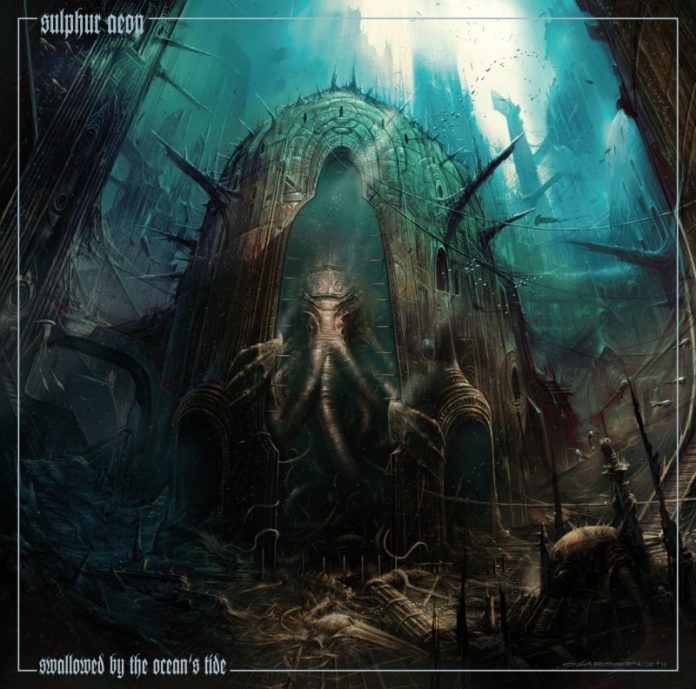 Music is a lot like cooking; all necessary to make an awesome final product is to put items together; a cup of guitars, a cup of thundering drums, add generous amounts of bass and guttural vocals and bake for 3 weeks in a sweaty studio in Manhattan and you’re set. Some of the more cynical of us will tell you that everything has been done before; every combination of notes has already been put together, every spice imaginable has already been added to every meal. True, the veal parmigiana that you cooked is not the first ever of it’s kind, but simply because it’s not earth shattering and groundbreaking doesn’t mean it’s bad; being new says nothing to how well it was executed. That, is the most important part. In that sense is where Sulphur Aeon‘s new album Swallowed by the Ocean’s Tide fits; while it isn’t anything new, it is a masterfully executed death metal romp in every manner.

Somewhere in between Emperor and Behemoth is where Sulphur Aeon lies. I’m not talking about Emperor in black metal terms; Sulphur Aeon is a death metal band through and through, but they do have that atmosphereic “open” quality to many of Emperor‘s tracks contain; there’s long ourtros and creepy underwater intros aplenty to be had. That, among with the stellar production on the album, Swallowed By The Ocean’s Tide, really “breathes”; the wide open stereo image gives an extra level to the songs and really takes Sulphur Aeon‘s epic sound to a plateau that few other bands explore. As far as death metal goes, everything from Dismember, to various other mid-to-late 90’s European death metal bands make their indelible mark. However, the one influence that stands out the most is Behemoth‘s sound, especially noted on the tracks “Swallowed by the Ocean’s Tide” and “Incantation”. Everything from Behemoth’s trademark double bass spurts and open string chords make an appearance. That being said, it in no way feels like a rip-off, nor does it feel like Sulphur Aeon are struggling for ideas or reaching for straws. On the contrary, Sulphur Aeon manages to craft a sound altogether their own, weaving complex layers both heavy and melodic. Through the use of their Judas Priest like harmonic leads and melodies Sulphur Aeon create a sound that is extremely heroic and at the same time, foreboding. Almost like sunken city filled with treasure that is guarded by a one gigantic and pissed off octopus. What this leads to are some very interesting moments that are both insanely heavy (like 20,000 leagues heavy)  and melodic thanks to the hooks that are peppered throughout. Make no mistake of it though, there are an insane amount of blast beats on this album.

And while the the album having a quality that “breathes” is definitely great, it does have its drawbacks; mainly in the lack of definition in the bass and cymbals. While I’m not saying that there is no bass or cymbal work, there is definitely some of it that gets swallowed up by the chaos of everything else, especially during parts that are heavy on the double bass drums. But while it one can really complain about it, there really is no point; it simply doesn’t seem like it was an engineering error, rather a stylistic choice; in order to create the wide open sound that the album relies so heavily upon, there had loss of definition somewhere. Bass and cymbals are always the first to go. In this case, I really believe that Sulphur Aeon chose the right option, opting to create a monstrously epic sound, even though it had some negative effects on the stereo definition of their sound.

Without a doubt, the sophomore release of Sulphur Aeon marks a band truly confident of their sound, experts in their respective genre, and true ambassadors in the genre of forbiddenly epic death metal. It’s rare that a band should have this amount of cohesiveness only on their second release, but you don’t hear me complaining. With more releases like this, 2012 may just yet be usurped. Also, brownie points for covering the theme from one of my favourite zombie movies. Goblin would be very proud.