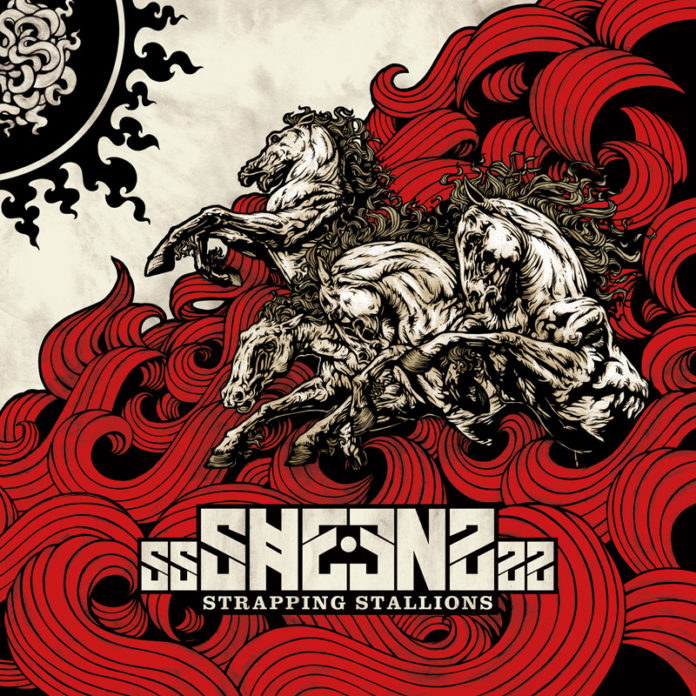 Yeah, okay. That’s a weird band name. But let’s not get hung up on it. Finnish sextet ssSHEENSss boast an impressive track record with an intense live regime and collaborations with producers Billy Anderson (Neurosis, Eyehategod, Melvins) and Brad Boatright (Corrosion of Conformity, Sleep). Following on from their 2013 self-titled LP, Strapping Stallions aims to deliver infectious rock and roll, partying somewhere between Turbonegro and early Queens of the Stone Age.

What’s instantly apparent about Strapping Stallions is the fantastic production, sounding punchy, clear and crisp, and just a little rough around the edges. The fuzzy guitars sound like sandpaper against the silky smooth vocals and reverberated drums, and really lets each member shine. Vocalist Mikko Kiri also brings a ton of life to the album, with hugely spirited, entertaining and varied performances throughout, throwing some theatrics into the mix, channelling the likes of Nick Oliveri, Dave Grohl and Brent Hinds. Plus there’s a few woah-ohs. I love a good woah-oh. Though, surprisingly, for a band with three guitarists, there’s very little variation in the guitar lines aside from a few nice harmonisations. The potential of the band’s instrumentation feels highly underutilised at times, especially for a band that plays so heavily into the braggadocious, ‘guns blazing’ attitudes of classic metal. The band members don’t even show off; it just feels so safe inside the confines of rock.

Out of the nine tracks on Strapping Stallions, two are cover songs. With the beer n’ beards attitude the band embodies, it comes as no surprise that one of them is ZZ Top‘s ‘Concrete and Steel’. But more unusual is ssSHEENSss‘ oddly-unfitting rendition of ‘Love Will Tear Us Apart’. As odd a choice as it is, it’s interesting to see the band break away from their defined sound and aesthetic, performing a more sinister, brooding take on the song which shows the band’s sound is more malleable than we first thought, though it’s one of the few spots on the album where Kiri‘s vocals fall short, and it’s a shame that the shift of atmosphere in this cover isn’t displayed anywhere else on the album.

Strapping Stallions boasts some impeccable musicianship and tight songwriting, but the band very much needs to push themselves for their next record. They have their sound and their style pinned down perfectly, but need to inject some dynamic new ideas into their music. For that reason, the album suffers from a numbness to the same old tricks and tropes. It’s a great introduction for new listeners as to what the band’s capable of, but feels more like a promo CD than a full album. It’s just hit after hit after hit, with little dynamics or change, and the addition of two covers which cheapen the album. That said, it’s still a solid foreground to ssSHEENSss’ future work and provides a stellar soundtrack to a night of drunken debauchery.

Infectious songwriting and great musicianship.
Too much of a good thing. It's like eating a ton of sweets and throwing up afterwards.
3