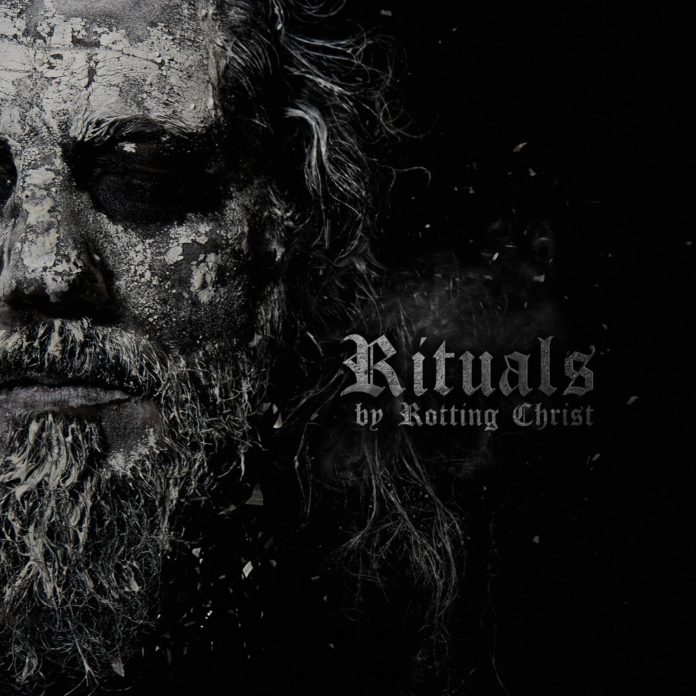 It’s not often that you find a title that really describes the sound of an album. More often than not, album names are just an afterthought, or just the name of the main single. Rituals, Rotting Christ‘s new malevolent release, is different.

Listening to Rituals is a deeply unsettling experience. Despite being a terrific album, one of the best I’ve heard from this Greek band, it’s not made to make you feel at ease. The sounds are often cacophonous, or even deliberately amelodic. Opener “In Nomine Dei Nostri” is a good example of this, starting off the album with martial-sounding chant enumerating demons and pagan deities. Mormo, Ishtar, Jarilo, Astaroth, and others, are all being invoked in the name of Satan. Sakis Tolis‘ voice sounds as powerful as ever giving way to a sample of a deep recital of the black mass (the 1968 version made popular by Coven, then adopted by LaVey), only to then go back to Sakis simply whispering an incantation. This song really sets the mood for the whole album, as all the songs seem to depart a bit from the more melodic style of metal that we saw in albums like Theogonia or Katá ton Daímona Eaftoú, opting instead for a more epic sound. The use of drums in some of the songs seems to be aimed at creating an almost tribal-esque feeling (“Apage Satana” can easily remind you of the indigenous percussions used in the Roots album by Sepultura), reminding us of the “satanic” nature of this ordeal. This isn’t just an album, it’s a soundtrack to a black mass.

Rituals also works to highlight some of Sakis Tolis‘ versatility as a singer, not only in his ability to go from whispers and speaking-in-tongues-style voices to deep growls, but also in his desire to use different languages. Just like, back in the day, he didn’t sweat singing in German in “Der Perfekte Traum,” in Rituals we see him demonstrating his abilities to turn Hebrew, Greek, English and Latin into his weapons of choice. Even French (courtesy of Samael‘s Vorph on “Les Litanies de Satan”) and Marathi (in “Devadevam”) make an appearance.

Musically, the album is at times quite close to Aealo, as manifested in the use of some folkloric elements in tracks like “Tou Thanatou” (which at times comes off quite close to the folk metal stylings of Eluveitie) and “Elthe Kyrie”. At the same time, however, it tries to create a darker and more powerful sound, although packed rather tightly. There isn’t a lot of space left for showing off any kind of virtuosity. Even a song like “Komx Om Pax”, which doesn’t have much in terms of lyrics, stick with a simple-yet-powerful melody, together with some assorted screams and wails. Rotting Christ aimed at unsettling you, not impressing you (amazing-but-brief riffs notwithstanding, of course). The same can be said of “Elthe Kyrie,” which includes the voice of Danai Katsameni, a singer at the National Hellenic Theater, who provides wails and the kind of fast-spoken words that remind us of their countrywoman Diamanda Galás in The Litanies of Satan.

Rituals is a terrific album that, as a fan of Rotting Christ, really represents what I wanted from the band. Although it took me a little bit of time to get accustomed to it (some of the more “ritualistic” sounds can be annoying, particularly in songs like “Devadevam” or “Apage Satana”), the payoff was more than worth it. I made sure to order a copy of this album (red vinyl, if you must know) and I really think you should too.

POSITIVES
Great use of percussions to create a deeply unsettling ambience.
Powerful songs (some more melodic than others) with a great use of guest vocalists
NEGATIVES
Some of the most "ritualistic" parts (e.g. Devadevam and repetitions in "Apage Satana") can be a turn-off for some.
4.5